Last Saturday I helped handle birds for a Flint Creek Wildlife Rehabilitation program held at the Barn Owl Garden Center in Carol Stream, Illinois. I looked like a wet rat after catching up a couple of birds in the pouring rain, but I was really pleased that all went well after having not seen the birds for several weeks. I put equipment on Meepy the Barred Owl before she was whisked off to meet the mayor (!!), and then I caught up 0511 the Red-tailed Hawk.

There were four of us handing birds at the garden center. Here I am with 0511; Kim is holding Junior the Great Horned Owl, and Tina is holding Pip the Barn Owl. Karen was holding Turkey Junior (a handsome Turkey Vulture) and was kind enough to let me use this photo she took of the rest of us. 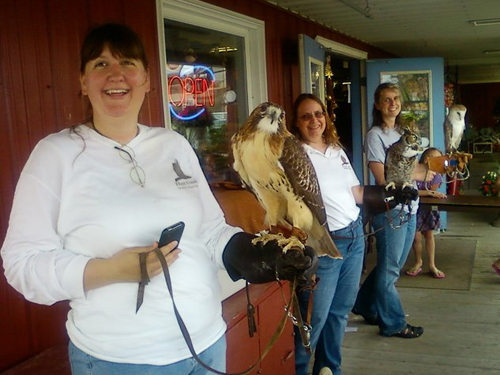 The program consisted of us holding the birds while the public came by, oohing and aahing and asking questions. Mostly people like to hear what kinds of things the birds eat, how long they live, and other vital statistics like that. They also want to know the circumstances about the bird becoming an education raptor. Many of the birds in Flint Creek’s care were being raised illegally by members of the public and became imprinted on humans, making them unreleasable. Questions about the birds’ backgrounds became good opportunities for us to educate people on certain wildlife “dos and don’ts” (mostly “don’ts!”).

Often people would start to tell a story about a raptor or other birds they have seen in their back yard. It’s great to hear other people who are genuinely interested in their local wildlife. Some stories throw me, though, like when people say they regularly have a hawk on their lawn that’s twice as big as the bird I was holding – a female Red-tailed Hawk. Hmm!

On Saturday we were also often questioned about the birds’ weights, especially when we would use our non-holding hand for a bit of support. 0511 probably doesn’t weight more than 3.5 lbs, but my arm was numb after holding her for three hours. Still, I couldn’t resist taking Meepy for a bit when she arrived later in the afternoon. 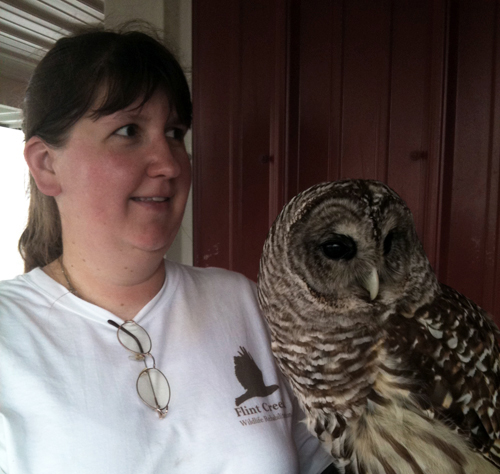 It was a fun program and I enjoyed myself! I closed out the day putting both Meepy and 0511 back in their mews. Today I’ll be volunteering at Flint Creek’s Itasca facility for the first time. Can’t wait to see the birds again!

One Response to After 3 hours, a Red-tailed Hawk feels like 20 lbs.