If you have found this page via the Halt Bird Banding site, welcome. I do not agree with the mission of that website and I am dismayed that my words are being used to further an anti-banding agenda. The text in the post below has not been edited in any way. However, I would like to make the following statements. (1) While I am mortified by my own cavalier words regarding the unfortunate deaths of birds by deer, I understand that in scientific work, unfortunate instances may occur. On future visits to the banding station, I noted that the net in question was not raised or more carefully monitored to eliminate the possibility of deer accessing birds in the nets. (2) Bird banding helps birds. There are many specific examples, but in general if you understand that humans destroy bird habitat, then you must understand that gaining knowledge of bird activity, habitat use, movement, etc, is beneficial to birds. Suitable habitat is destroyed or modified by human activities ALL THE TIME, but there are people working to mitigate this, and to HELP BIRDS. When we understand how birds interact with different habitats we can better save or restore that which will be of most use to the birds most in need. If people were not ruining the planet, I think the Halt Bird Banding movement might have more support, but IN THE WORLD WE LIVE IN, this is not the case. This is not the only purpose of bird banding, but it’s a big one. (3) I am not and have never been a master bander. I volunteered at and observed during banding activities. Please keep that in mind as you read through any of my posts regarding bird banding. Thank you for reading this addendum to my original post.

Following the banding demonstration we attended earlier this month, last week we were able to observe at the MAPS team banding station at Rollins Savanna for a while. The team has 10 mist nets set up in one part of the preserve; the nets are checked at least every half hour. When we arrived we joined team members as they checked nets 9 and 10. Everyone was very excited to see that a Ruby-throated Hummingbird was caught in #9. Very few people are permitted to band hummingbirds in the United States so the objective here was to safely remove the bird from the net, perform a quick examination and then set the bird free. When hummingbird banding is the objective, special feeder traps are set rather than using mist nets to capture the birds. Vickie Henderson has a great post about the banding of hummingbirds at her blog: Hummingbird Mysteries Uncovered through Banding. As you can imagine the process of removing a hummingbird from a misting net is a delicate process. In this case it took about 5 minutes and we could hear the juvenile male Ruby-throated Hummingbird crying during part of the procedure. The bird was not harmed and was released shortly after we all arrived back at the banding station.

We went on the next net run but no birds were recovered. We learned that earlier in the morning two birds were lost to deer – the deer ATE two birds that had been caught in the nets. This was shocking to hear and even more shocking to discover for the banding team members! We were glad we missed that bit of ‘excitement.’ Can you imagine coming upon such a scene? ::shudder::

A later net run yielded over 10 birds and by the time they were brought back to the banding station it was time to go check the nets all over again. 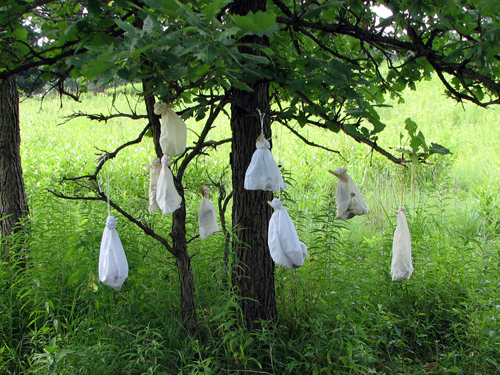 This left the two remaining banders at the station extremely busy. They were processing birds very quickly and there was not much time for photography poses or even to explain everything that was going on to us observers.

It was still a total treat to observe and I did manage to take a few banding action photos. Here’s a Field Sparrow being banded and processed: 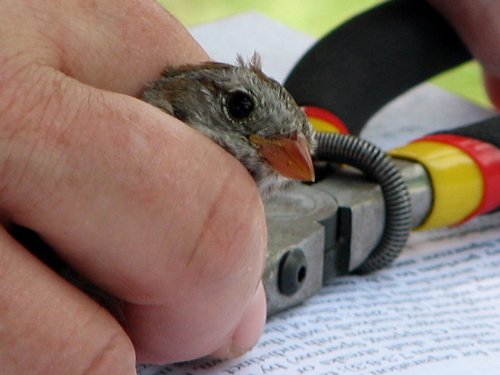 Here’s a Common Yellowthroat being processed, along with a rare photography pose. Several juvenile Bluebirds were also banded, including one recapture from earlier this year who was processed rather quickly and then sent on his way. A Red-bellied Woodpecker provided some comic relief when it fiercely pecked at the bander’s thumb while in the hand. The most common bird found in the mist nets were Song Sparrows.

It was great to be able to observe the banding team doing their work, and I hope we didn’t get in the way too much! I’m really interested in bird banding and hope to learn more about it.

2 Responses to Banding at Rollins Savanna