Florida birders are probably familiar with Michael Brothers, a Volusia County birder who frequently shares interesting sightings on the local listservs. This week he posted a remarkable story and photos and I asked him if I could share them with my blog audience. Here’s his original post as it appeared on the BRDBRAIN email list:

Today, 2/21, I stopped by to see the gulls at Daytona Beach Shores and witnessed an amazing sight. I saw a large group of gulls take off from along the beach and assumed that some people had chased the birds off.
When I got closer I found an adult Peregrine had killed a Laughing Gull and it was calmly eating it right on the beach. The bird was amazingly tame and allowed me to sit only 20 feet away and photograph it for 15 minutes or more. It did not seem bothered by beach walkers going by only a few feet away from it. A few other birders came up and were also able to sit and watch the spectacle. Meanwhile, folks were driving by just behind us, either staring at the bird or oblivious to the rare event right beside them.

Now check out the photos he captured below. You can click on them to see larger. 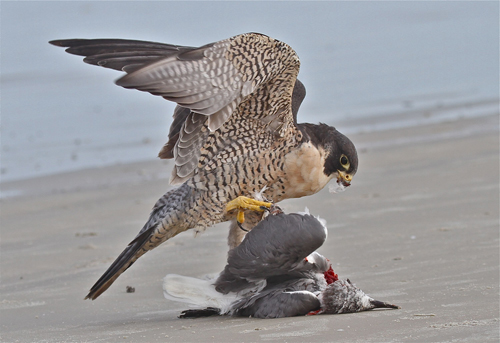 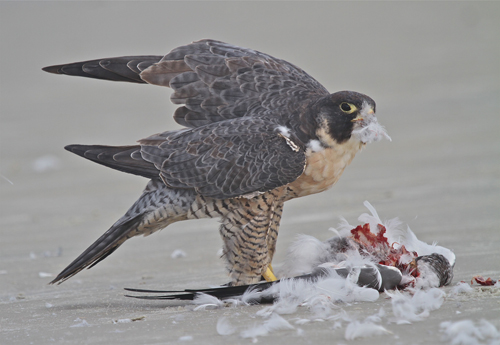 Peregrines are regularly seen hunting around the huge gathering of gulls that occurs near Frank Rendon Park in Daytona Beach Shores. Seeing one feeding right there on the beach, though? Remarkable! Thank you, Michael, for letting me post your story and photos.

UPDATE: It seems I’m not the only blogger sharing Michael’s photos and story! And that’s not all – there are even more photos!

This entry was posted in Behavior, Florida. Bookmark the permalink.

One Response to Peregrine Falcon feeding on a Laughing Gull