Last Tuesday morning during my drive to Flint Creek Wildlife Rehabilitation I saw two American Kestrels. One was diving from a utility wire down to the ground; the other was perched and bobbing its tale as kestrels will do. Little did I know then that later in the day I would hold my first bird on the glove, and it would be a beautiful American Kestrel.

Our instructor, Dawn, brought a carrier into Flint Creek as the class participants were arriving. The patient in the carrier was Phoenix, a remarkable bird that we would later get to see being treated.

The focus for the third week of the Raptor Internship was handling techniques (we earlier covered basics and equipment). We began with a lecture and viewing photos of the basics of proper raptor handling. There is a lot to keep in mind when handling a bird, and all of the proper techniques are practiced in order to keep both the handler and the bird safe at all times.

After the lecture, Flint Creek’s beautiful American Kestrel Darwin was brought into the classroom. 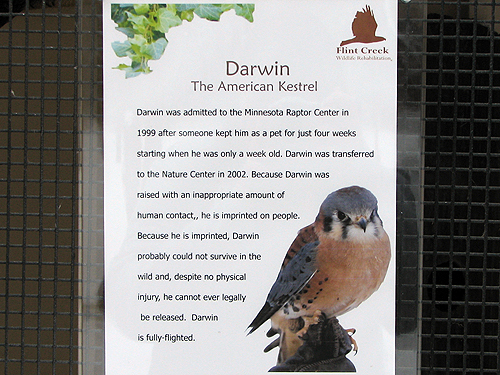 Dawn demonstrated taking the tethered bird from perch to glove. Then each student took a turn doing the same. We were each able to spend several minutes with him on our glove. Dawn had to talk us through each step but I think we all did very well. I know the other ladies in the class all looked like naturals once Darwin was in place. I was so nervous when it was my turn but both Dawn and Darwin were so patient. It was hard to take my eyes off of him when Darwin was perched on my glove – I was awestruck!

Once the handling practice was over, it was close to noon, which meant it was time for Dawn to take care of Phoenix once again. We got to watch Dawn and her patient through the clinic’s one-way glass as Dawn administered medicine to Phoenix and fed her. I was so moved not only by this exceptional bird’s will to live, but by Dawn’s extreme professionalism in handling the bird. This beautiful bird has a long road ahead in her recovery. Please consider donating to Flint Creek Wildlife Rehabilitation for all of the remarkable work they do.

After lunch the rest of the class time was spent finishing our gloves from the last class and making equipment. We cut jesses, leash extenders and anklets from practice leather. Later I helped condition a few leather jesses in jess grease (kind of messy!) and even got to cut a few jesses using kangaroo leather. 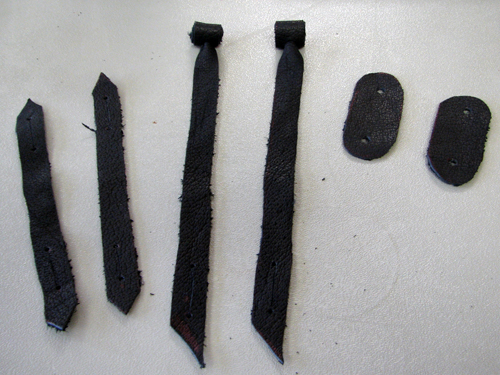 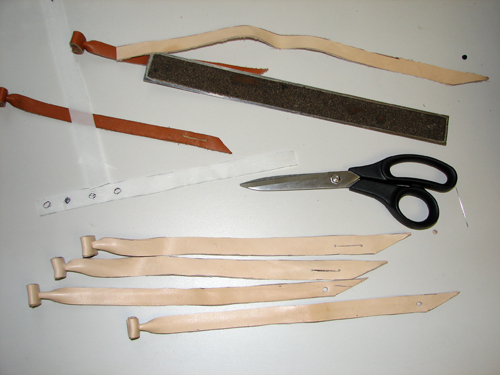 Jesses made from kangaroo leather

This entry was posted in FCWR, Rehabilitation. Bookmark the permalink.