We don’t often chase rare bird alerts. When we do, we’re skunked more often than not, it seems. I suppose we are not exactly alone in that regard.

Still, I was intrigued when I read a Harris’s Sparrow had been hanging around a residential back yard in Chicago. He was reliable, coming in to feed throughout the day. Successful sighting reports were pouring in on the Illinois listserv every day for about a week. Oh, let’s go for it. We’ll be downtown Thursday morning anyway… Thursday afternoon a Western Grebe was reported at Waukegan Beach, which is about 30 minutes due east from our home. Meh. Friday it reached into the 60s with bright sunshine. Grebe was still there, along with a White-winged Scoter. The forecast for Saturday was three inches of snow. Well. At 4pm it was decided we had to go outside and enjoy the last day of winter, and so we headed east for the lake (Michigan, that is).

Luck was on our side again; as we got out of the car we noticed our buddies Rena and Sonny Cohen heading out onto the pier. When we caught up they got us on the scoter almost immediately. 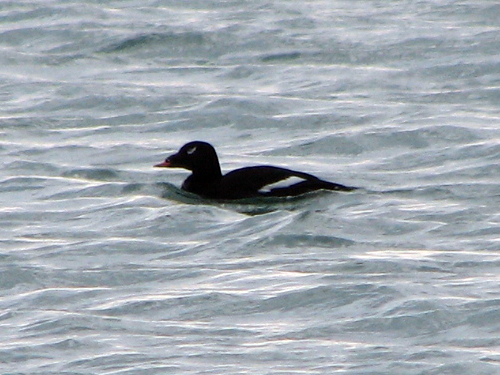 There was no sign of the grebe, but Sonny & Rena said they were going to try the Government Pier on the other side of the beach. Government who now? We followed them to a different parking lot and we all walked out together. Again the scoter was seen right away. And then there was the other star bird, swimming behind the scoter. 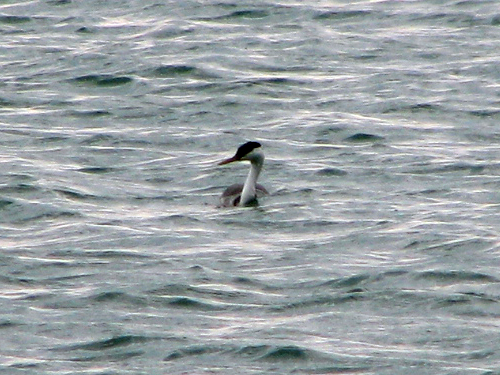 Eventually both birds came in much closer, giving all four of us killer views (despite the photos!). Here’s hoping we can keep up this lucky streak of bird-chasing.

This entry was posted in Life List, Rare / Vagrant. Bookmark the permalink.

One Response to Three lifers in two days