On Saturday we visited Volo Bog State Natural Area. I visited the park on a grade school field trip but I don’t remember it very well. This was Arthur’s first visit to the bog.

A bog is a type of wetland habitat where ground level water is acidic. Bogs are very common in parts of Europe and especially in the Netherlands (peat bogs). I’ve seen several peat-harvesting exhibits when visiting museums in Holland. Volo Bog is a quaking bog and is maintained by the Illinois Department of Natural Resources. It is the only remaining open-water quaking bog in Illinois and is the home to several rare and/or endangered species for the state.

We joined the Volo Bog State Natural Area Bird Walk which was a free guided bird walk co-sponsored by McHenry County Audubon. Group leader Joel took our group of about 10 participants on the Tamarack View Trail which is a 2.75 mile loop trail around the bog. 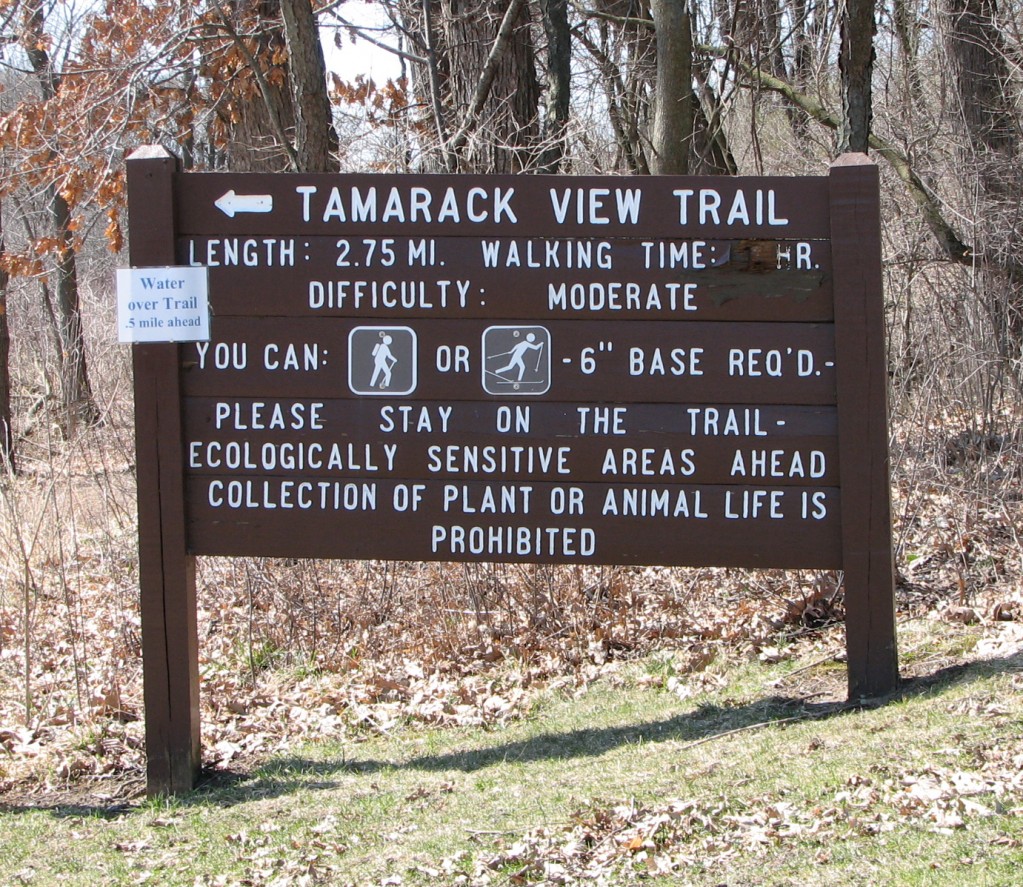 The trail was lined with Bluebird houses in the open areas. 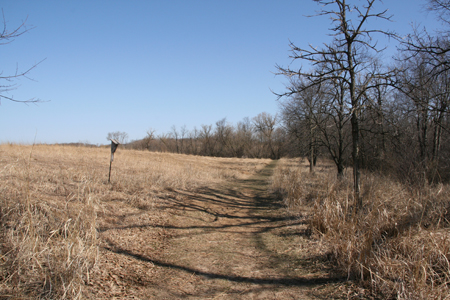 Almost all of the houses we saw were being claimed by a pair of Tree Swallows. The walk overlooks a couple of ponds from several vantage points. 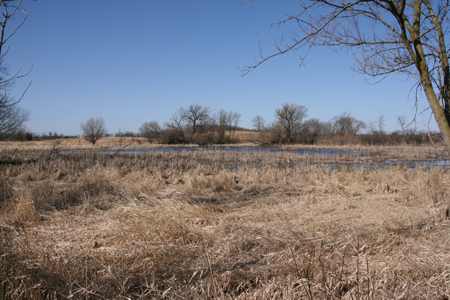 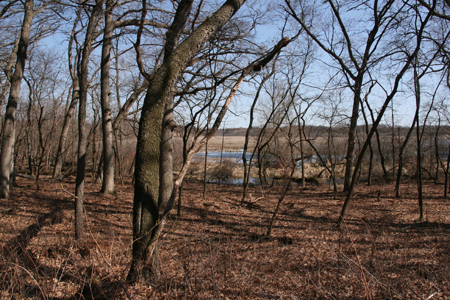 Nearby one of the ponds we were very surprised to find a bird hide. They are not common here in the U.S. but the abundance of hides in the Netherlands was one of the sparks that helped get us into birding. I’ll have another post about bird hides in the future. This was a nice little hide with enough built-in benches to hold about 8 birders.

Close to the hide we spotted this Eastern Phoebe. We also spotted a group of three Northern Flickers tussling between some trees. Joel speculated this was probably a female and two males. Here are two of them: A part of the trail was flooded about a half mile from the start of the loop (or in our case, from the end). We had to climb over a fence and walk on the road for a bit. A part of the Tamarack Trail was also floating boardwalk. 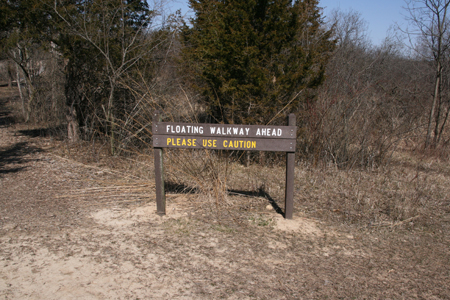 We walked behind most of the group and it felt like the boardwalk was buckling violently, although I suppose it probably felt worse than it actually was. It reminded me of the Tacoma Narrows Bridge. 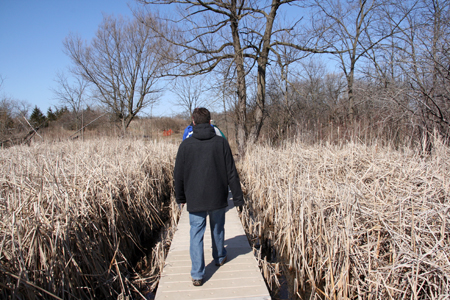 After the bird walk, Arthur and I walked the much shorter Interpretive Trail, which is almost entirely floating or fixed boardwalk. 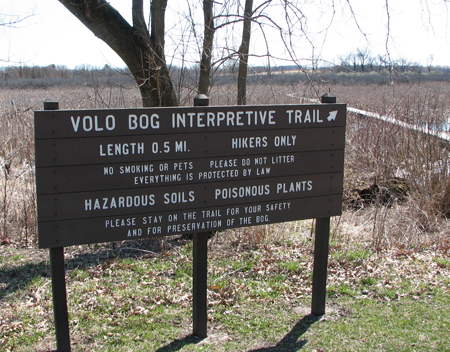 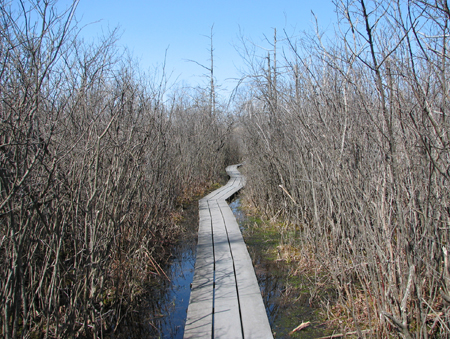 The boardwalk goes into the heart of the quaking bog. Part of the trail was lined with Tamarack trees, which are unusual because they are deciduous pines. They are a threatened species in Illinois and the Tamarack Zone at Volo Bog is close to the southern edge of their North American range. Every fall the needles of the Tamarack trees fall into the water, releasing tannic acid.

Pitcher Plants are another endangered plant species that can be found along the Interpretive Trail. These carnivorous plants absorb decomposed insects that fall into the plant’s water cups. 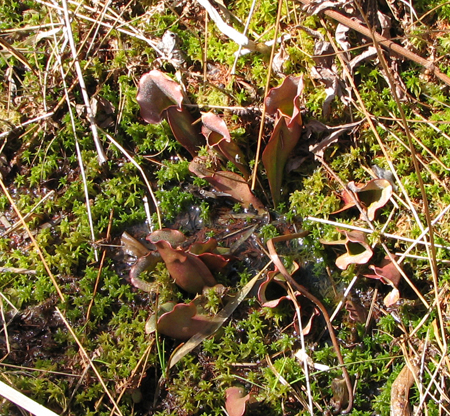 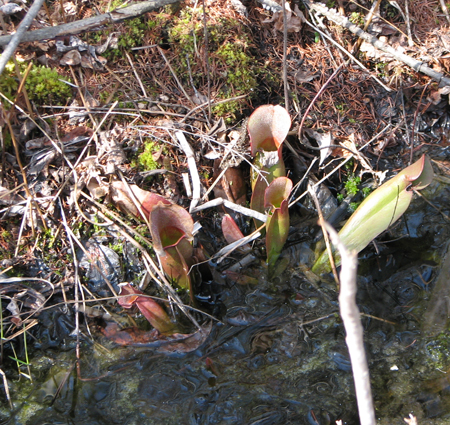 I had no idea there were carnivorous plants here in Illinois so I was really amazed to read about and then see these pitcher plants!