Birdlife Finland launched a new website this week, www.etelasuomenmetsat.fi, designed to highlight the need to save the forests in the south of the country. The website, in Finnish, Swedish and English, features information on seventeen forests in southern Finland which are currently unprotected.

“Birds such as Siberian Jay Perisoreus infaustus, Capercaille Tetrao urogallus, and the White-backed Woodpecker Dendrocopus leucotus, as well as hundreds of insects, plants and fungi have already become extinct or are rare in the region directly as a result of clear cutting and modern forestry methods that leave little room for wildlife or for visitors.”

Posted in Aside, Endangered, Europe, Websites & Blogs | Leave a comment

The coops for poultry chickens should be larger, according to a statement made by the European Parliament this Tuesday. The proposal was made by Dutch politician Thijs Berman.

Chickens should have about 10 percent more space by 2013, according to the Parliament. The current standard says that chickens of 38kg need to have one meter of space. That weight class will be lowered to 34kg. With this new regulation the Parliament sends a clear message that animal well-being is important, according to a spokesperson.

Critics of the plan say that more research should be done on the impact of increased space. Another fear is that European chicken farmers will not be able to compete with Brazilian farmers.

The common sparrow in the Dutch towns of Noordwijk, Amsterdam, Alkmaar and Hardenberg will soon have more places to call home. A test project on home roofs in these communities will provide housing specially designed for the sparrows, so that they are sure to have nesting area available.

In 2005 the wild sparrow took several blows in the Netherlands. Openings in homes and roofs were better sealed. The amount of shrubs in parks, sidewalks and other public places was reduced for security reasons. Sparrows prefer to make their nests in openings in buildings, or in the tight branches of shrubs and bushes. 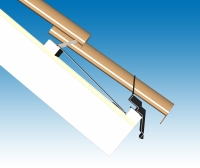 In order to give the sparrow abundant nesting areas in neighborhoods, the roofing firm Comfortdak has designed a special roof tile, the Vogelvide (see photo), which allows sparrows to nest near the foot of the roof. The first unit was placed on a rental house in on the Abraham Rademakerstraat in Noordwijk during a presentation by the bird protection group Vogelbescherming Nederland on Tuesday. In total approximately 100 homes will be fitted with the special tiles.

Free range chickens, ducks and other poultry birds in the Netherlands must be penned or otherwise sheltered from contact with wild birds starting February 20. The measure is to prevent the H5N1 virus from spreading into the country. The Dutch interior minister Veerman declared this new regulation on Monday in response to the virus being found in three EU countries: Greece, Italy and Slovenia.

Initially Veerman called the cooping up of birds to begin on March 1st. A spokesperson from the Dutch Organization for Poultry Farmers (NOP) was satisfied with the measures taken by the government. He stated that everyone from tourists to bird farmers should be aware of the situation and alert to the dangers on the spread of the virus.

About a hundred confiscated Mute Swans (cygnus olor), intended to be slaughtered, are in need of a new home in the Netherlands. The birds, which were being kept illegally, were confiscated at the end of 2004 from their owner in Utrecht. END_OF_DOCUMENT_TOKEN_TO_BE_REPLACED

In the last few weeks dozens of protected birds have been illegally shot or poisoned in Beglium. The culprits are hunters, who consider the birds of prey to be “competitors”. The bird protection group Vogelbescherming Vlaanderen has asked the government to take action.

On Friday a forest ranger from the natural area Opglabbeek found a dead red kite, a rarely seen raptor. The bird was shot and had lead in the chest and leg area.

A spokesperson for Vogelbescherming Vlaanderen said, “Every year, just before the breeding period, many birds of prey are shot and poisoned. The poisoned birds eat bait set out for foxes.”

Vogelbescherming also points out that the poison is a health hazard for humans. The poisons release dangerous toxins in the atmosphere, like strychnine and carbofuran.

At Germany’s Bremerhaven Zoo, male penguins have paired together and care for pebbles as if they are eggs. Zoo officials tried to get the gay penguins to mate with females brought in from Sweden, with no success. Read the story German zoo fails to make gay penguins straight at Expatica.

Posted in Aside, Europe, Offbeat, Zoo | Leave a comment

A total of 1745 birds were counted. The birds come from arctic forests and have typically been rare visitors to the Netherlands. According to Waarnerming.nl, a website where users can note birds and other animals they have spotted in the wild, it is the third time in four years that the number of Waxwings counted in the Netherlands has increased. This year, however, was the first time an organized count was conducted.

Most of the birds were counted in Gelderland, with 443 individuals counted in ten groups. Many birds were also noted in the provinces Zuid Holland, Noord Holland, Overijssel and Utrecht. In the other provinces a maximum of 4 groups per province was noted.

The Waxwings are presently concentrated in the middle of the country. At the beginning of January a great number of the birds were noted in the north of the country, but most of them have now disappeared. Therefore it is expected that the population is moving south, as it has also been noticed in past years.

The Waxwing lives in the forest in northern areas, but while overwintering in the Netherlands they prefer to roost in urban areas. The birds are not afraid of people, likely because in their breeding areas they normally don’t have contact with humans.

Because of their unexpected, invasive behavior, in earlier times they were considered to be bringers of misfortune, hence their Dutch name Pestvoge”, or plague bird.

In the German areas of Lower Saxony and Schleswig-Holstein, the sea eagle population has gone from just four pairs thirty years ago to 68 pairs today. Lower pesticide use and rehabilitation of wetland environments are reasons for the remarkable comeback of this majestic bird.

The German sea eagles have spread to Denmark, which now plays host to at least 15 breeding pairs.

Dutch bird watchers have spotted young sea eagles hunting in the Netherlands in the winter months and hope to have breeding pairs residing in the area soon.

Sea eagles are nomadic for the first four years of their lives, seeking out new territory for when they are ready to settle down.