Back in January 2011 I wondered if The Year of the Bird Movie was upon us. Besides the highly-anticipated release of The Big Year, a handful of other bird-related titles were in the works.

One such film was A Birder’s Guide to Everything, which at the time was listed as having a 2011 release date on IMDb. The independent film had a different time table in real life, and recently began shooting on location in Westchester County, New York.

Prior to filming, the director, Rob Meyer, posted this promotional video.

A Birder’s Guide to Everything Sizzle from Rob Meyer on Vimeo.

This video “sizzle,” along with the added positive early word from Kenn Kaufman, makes me very excited for this movie! Today IMDb indicates a January 2013 release date, but we should probably take that with a grain of salt. Meanwhile filmmakers are updating the BGE official blog and BGE Facebook page on a regular basis.

The official website for The Big Year has been updated with an about page, more video clips, a photo gallery, and more (hope you like Creedence!). There is also a link to Audubon.org “to learn more about the birds in The Big Year.” It’s nice to see the promotion of the movie including more about the actual birds. 🙂 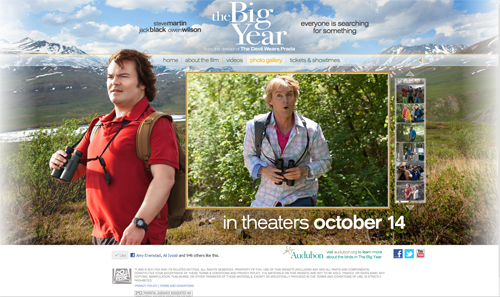 We have two new clips to pour over until opening day on October 14th. First, here’s a quickie explanation of what a Big Year is, according to The Big Year.

Next, an expansion on the short “fallout” sequence first seen in the trailer.

I have a much better feeling about the movie after seeing these two clips – they actually made me laugh. I mean, this Kenny Bostick character is some birding rock star – he’s been on MULTIPLE covers of Audubon, Birding, and WildBird magazine!? One very quick nit / question (of many to come!): what is that green turaco-looking species shown at :29 in the first clip?

In the United States, unless its a holiday weekend, feature movies are traditionally released on Friday. Movies often have their best weekend during the first week of release, and a lot depends on the competition they face during that first weekend. So as birders anxiously await the release of The Big Year on Friday, October 14th, let’s see what else is coming to theaters on the same weekend.

Trespass is a thriller starring Nicolas Cage and Nicole Kidman, and directed by Joel Schumacher. Like The Big Year, Trespass so far doesn’t seem to have an official site or any trailers in circulation. Will audiences go for a big-name thriller over big-name birding comedy?

Footloose is a remake of the 1984 hit musical of the same name. Footloose already has an official site and has several trailers in circulation. I suppose this movie has a very different target audience from The Big Year.

The Thing is not a remake but rather a prequel to another 1980’s hit (John Carpenter’s film of the same name). The horror flick already has an official site and trailers to view.

The independent horror Killer Holiday is also slated for October 14th. I would guess this might have limited release, but I’m not sure. This movie has no official site but an official Facebook page instead.

Finally, the Spanish drama The Skin I Live In will open in New York and Los Angeles on October 14. This Sony Classics title was directed by Pedro Almodóvar. Interestingly, artwork for the movie includes Audubon’s iconic American Flamingo painting, which can be seen on the official site.

This year, birders are looking forward to a big screen adaptation of a popular birding book. The Big Year looks to be a big comedy, with stars like Steve Martin, Jack Black, Owen Wilson, Rashida Jones, and others. Birdchick got a great scoop back in December when she heard from someone who saw an early preview. Check out her post here: Big Year Movie News & Rumors. It was recently revealed the film will have an October 14th release date. (h/t Greg Miller via Facebook)

But The Big Year isn’t the only movie coming out in 2011 that may interest birders. IMDb shows another intriguing title, A Birder’s Guide to Everything, with a 2011 release date, though the director’s personal website shows the film to still be in development. This looks to be a coming-of-age-with-rare-birds family film. Bryan Cranston and Ben Kingsley are named as stars.

An animated feature which looks to have a conservation theme, Rio, will come on out on April 15th. The story follows the last two Blue Macaws on Earth, one a household pet living in Minnesota and the other living in Rio de Janeiro, Brazil. The two are brought together and mayhem ensues. Here’s a trailer:

Finally, another animated movie, Rango, will come out on March 4th. This doesn’t focus on birds, but looks to be a standard animated family flick, centering on a chameleon and a posse of desert misfits. I just thought it was worth noting some of the birds I’ve seen in the trailers: a Burrowing Owl mariachi band; Greater Roadrunners doubling as horses; and a Red-tailed Hawk depicted as the ultimate villain. Learn more at the official Rango website.

Are you planning on seeing any of these movies? Are there any other films you’re looking forward to seeing in 2011 (bird-themed or not)?