I became ill shortly after the Gull Fly-in on Thursday night (NOT from the gull-watching, though!) and I continued to feel green all day Friday. I was so incredibly sad to have to miss an entire day of the Space Coast Birding and Wildlife Festival – what a lousy time to get sick! I missed a field trip and a few classroom presentations and I was so bummed.

I felt like myself again on Saturday and had a great day at the festival. And as a consolation to missing Friday, Arthur and I signed up for an extra day, Sunday. Our first presentation wasn’t until 10am Sunday morning, so we decided to make a rather mad dash to Merritt Island NWR and take a spin around Black Point Wildlife Drive.

It was incredibly birdy, and it was also quite naturally crowded with birders. We had a hard time getting off the main road because of a gaper’s block right at the entrance. A mixed flock of White Ibis, Roseate Spoonbill, and others were delighting several cars-full of birders. 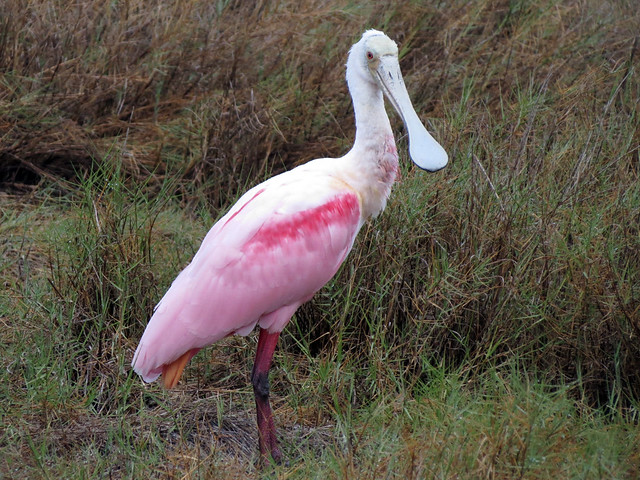 We squeaked along, delighting in the delight of all the out-of-state birders gawking at Florida specialties. All along the road we came across clumps of birders standing on the road, looking at and photographing great birds. We pressed on, slow but steady. Once we crept by a pair of photographers pointing their cameras into a ditch close to the road. Arthur looked down as we slowly passed and whispered to me, “Bittern!” I pulled over and we carefully, quietly walked towards the photographers to get a look at the American Bittern. My first view was like this. 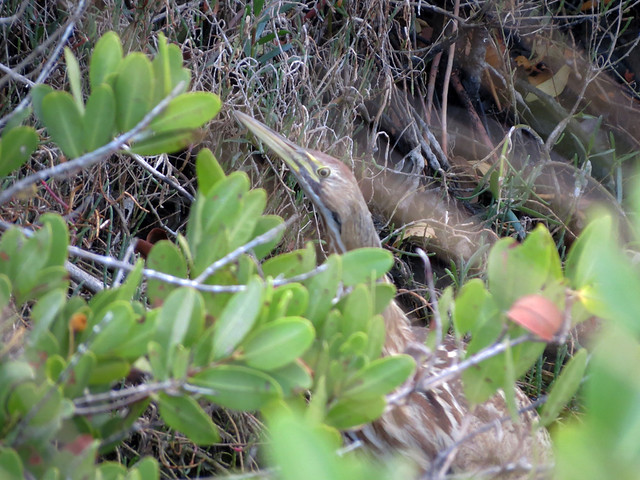 Normally I would be ecstatic to take such a photo of an American Bittern with my point-and-shoot Canon. But as we watched, the bittern stepped out from behind the reeds to hunt. Check out the motion in the animated GIF below; the bird moved its entire body but the head stayed perfectly still! 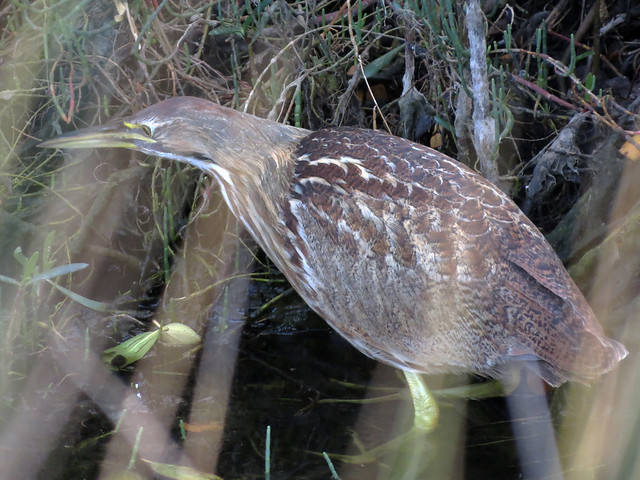 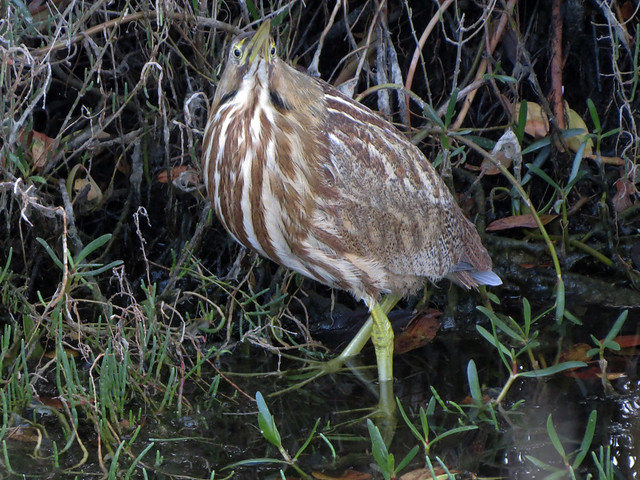 We watched it for perhaps five minutes before it caught a tiny snake, ate it, and then headed back into the reeds and out of view. 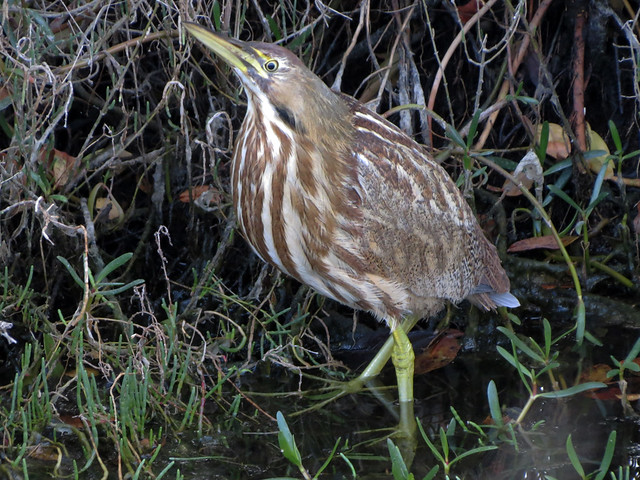 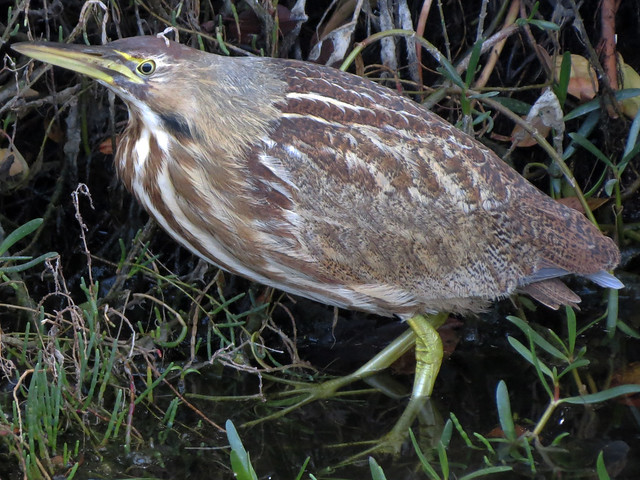 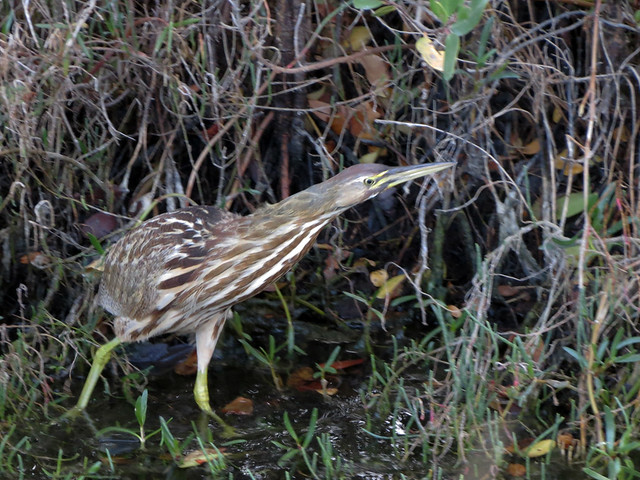 After it disappeared, one of the photographers remarked to no one in particular: “422 photos!” That’s a lot of photos of a very cooperative and beautiful American Bittern. I’m sure at least 421 of them were better than mine, but I’m thrilled with what I got anyway. I hope you like them, too.

More fun from our visit to Merritt Island NWR and the Black Point Wildlife Drive on December 10th. There were lots of kingfishers, yes, and lots of other birds to see, too, like this one. It had rained a bit in the early morning, but it wasn’t much more than a drizzle and it didn’t last very long. So we were puzzled when we came across this very wet Loggerhead Shrike close to the Wild Birds trail. It was completely soaked across the lower body and tail, and I wondered if it fell into water while pursuing prey. It perched in the open and shook itself a few times, but we didn’t see it preen at all. After a while it started to vocalize.

It didn’t mind our slow approach or observation, so I happily fired off a bunch of photos while wondering what exactly happened to this wet little predatory songbird. Last week Arthur and I spent a few hours checking out the action at Merritt Island NWR’s Black Point Wildlife Drive. Bird-wise, there were a lot of new arrivals, including over a dozen Belted Kingfishers. Florida has kingfishers all year, and we invariably see them on Black Point, but during the winter the residents are joined by migratory birds from the north. I’ll never forget the many, many Belted Kingfishers we saw a few years back during a drive on U.S. 1 from Key Largo to Key West. It seemed every stretch of telephone wire had a kingfisher or two on it, every one of them looking down into the water. We saw the handsome fellow pictured here on December 10th. Can you find the imposter in this raft of coots? This was just a portion of a much larger raft of 99.9% American Coot taken on the Black Point Wildlife Drive at Merritt Island National Wildlife Refuge late last month. Arthur and I paid a short visit to Merritt Island National Wildlife Refuge in mid-September. Driving along Biolab Road, we came across several Turkey and Black Vultures loafing on and around the gravel roadway. We slowed down to have a look at this Turkey Vulture perched in a low tree. I love Turkey Vultures. Vultures get a bad rap for their looks and their habits, which is really unfortunate. They are beautiful, big and charismatic birds. I love how they are so social – always soaring together, or sharing a meal in relative peace. Flint Creek has one magnificent Turkey Vulture among their education birds, a male named Turkey, Jr (or just Junior). I only tried to handle this bird one time, and he apparently didn’t approve of my looks or habits, because he bit me not once but twice (and left a lovely scar on my left hand). I didn’t attempt to handle him again. To my great chagrin, all of the new handlers at Flint Creek – who graduated earlier this year from the Raptor Handler Internship where I assisted – are in love with Junior, and he seems to be in love with them, too. Yes, they handle him with ease and mutual respect. Of course I’m happy for Junior and the volunteers and especially for FCWR. But dang, Junior, what did you have against me?! Luckily I can still enjoy Turkey Vultures like this one – from afar. They’ll be with us here in central Florida all year, unlike the northern Illinois birds we only saw during the warmer months. And if they don’t like me, I’ll just get the cold shoulder. No more scars! I’ve submitted this post to this week’s Bird Photography Weekly. BPW is a regular collection of user-submitted bird photos from all over the world. The new edition comes out every Sunday. Go have a look at this week’s submissions!