Last month, a couple of things that had been passing through my bird-type social media circles came together in real life for me at Gemini Springs.

A May 2014 article from The Slate was being passed around on Facebook. Let Kids Run Wild in the Woods is subtitled “Let Kids Run Wild, Build Forts, and Pick Flowers. Nature Can Take It.” The major theme is about how knowing about a thing (broadly speaking, the environment) leads to caring about that thing.

Around the time this was being passed around my birding circles, the Wandering Herpetologist posted an article about the differences between birders and herpers. Herpers are people who are interested in amphibians and reptiles. The post points out that herpers are likely to handle herps in the wild, while birders tend to have a different attitude (for the most part, birders can’t really handle wild birds).

Also around this time, Arthur and I encountered a misguided good Samaritan who wanted to help a Gopher Tortoise. The man rescued the tortoise from the middle of the road, but his plan for release left much to be desired.

With these things planted in the back of my mind, I went birding at Gemini Springs on June 9th. As usual, I started my outing at the fishing pier. While looking for waders and other birds starting their day, a young man, maybe 12 years old, approached me. He got my attention because he wanted to show me something — a young Florida Softshell Turtle.

I had only recently seen my first ever softshell at Gemini Springs. That animal was about the size of the one in the young man’s hand, perhaps the same turtle, or one from the same nest. 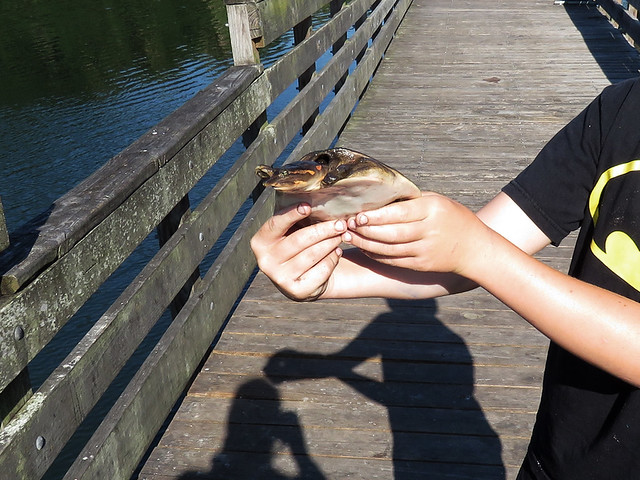 At first I was mildly alarmed that he intended to drop the animal into the water right from the pier, a good ten-foot drop. I was quickly reassured. The young fisherman had inadvertently caught the turtle on his line. The hook safely removed, he was about to release the turtle. For some reason he decided to take a detour to show the animal to the stranger with binoculars, me, standing at the other end of the fishing pier. I was grateful. He told me about how fast these slippery animals can run, and he invited me to feel the turtle’s backside, to see why these turtles have the name they do. He obliged when I asked for a photo. I thanked the young man for the turtle lesson, truly appreciated, and watched him carefully walk around to a safe spot and gently release the turtle at the water’s edge.

Whatever this young man will grow up to be, he’s already a fine naturalist and budding environmental educator. It’s pretty obvious he was allowed to actively engage his environment as he’s played in the woods. And he’s clearly on the “handle the herps” side of that fence. I am certain that as an adult he will continue to care for the natural world, and isn’t that wonderful?

Posted in Gemini Springs, Herps, Not Birds | Leave a comment

Back in September, Arthur and I spent a few days camping at Bahia Honda State Park in the Middle Keys. One afternoon we took a break from snorkeling to visit the remarkable Turtle Hospital on Marathon. Welcome to The Turtle Hospital

The Turtle Hospital has an interesting history. Here is a brief overview (related from signage at the hospital; any factual errors are mine).

It started when a man named Richie Moretti purchased Marathon’s Hidden Harbor Motel in 1981. The hotel had a 100,000 gallon saltwater pool, which was converted to display fish starting in 1984. The following year, local schools started visiting the hotel pool for marine education programs. Students asked, “where are the turtles?” Good question!

The facility expanded in 1991 when the nightclub next door to the motel was purchased. The nightclub became The Turtle Hospital in 1992. In 2005, Hurricane Wilma hit the motel and hospital hard. Flooding to the property was extensive and the motel ceased operation. The entire facility registered as a non-profit organization and continued as a rehabilitation center and turtle hospital. Today, the motel rooms are used (in part) for storage, and to house interns, visitors, and staff.

There’s no doubt the facility used to be a motel!

In 2010 a brand new education facility, funded by the Florida Sea Turtle License Plate, opened at the hospital. Lots of turtle information in the education center Educational tours are offered several times daily. Our tour began with a presentation on the different types of turtles that come to the hospital. The hospital used to be a nightclub! Next we got to see where injured turtles are admitted and where operations and procedures occur. We could see that the patients can be quite large! The biggest patient ever admitted to the hospital

A turtle was recovering from a procedure when our tour came through. A member of the staff must stay with any turtle as it comes out of anesthesia to help it breathe — unconscious turtles don’t breathe on their own. A patient recovers from anesthesia

We learned about the rehabilitation pools. The original sea water pool houses permanent residents as well as turtles at the last stage of rehab before release. Today the facility also has additional smaller tanks that can house turtles at various stages in their rehabilitation. Map of the turtle rehabilitation tanks We learned about some of the patients. Jack was a Green Sea Turtle with the condition Fibropapilloma Virus. This may manifest as large growths, which can be seen on Jack’s front left flipper in this photo. Xiomy was a Loggerhead Sea Turtle that was found in Islamorada as the victim of a boat strike. She had been admitted on July 29th, 2013. Xiomy was released in October. We were surprised to learn that the hospital had an education turtle in residence. Zippy the Educational Ambassador is a Loggerhead Sea Turtle that came to the Hospital from Gumbo Limbo on July 28th, 2013. Florida Atlantic University has a research facility at the Gumbo Limbo Nature Center; hatchling turtles are studied and then released. Zippy was kept to be an education ambassador; if I understood correctly, Zippy will eventually also be released back into the wild (with a very big head start!). A few little hatchlings were in one of the tanks. These healthy little turtles would soon be released. Loggerhead on the left, Green on the right

Finally we spent some time looking at the large pool, where we could see healthy turtles nearly ready for release as well as the hospital’s permanent residents. A patient in the final stages of rehab before release

The hospital has capacity to care for adult sea turtles that are no longer able to survive in the wild due to their injuries. Note the three round masses on the back of turtle in the lower right of the below photo. Those are weights; the turtle is unable to properly regulate its buoyancy on its own. Another turtle in the photo has one weight on its back. We had a great time visiting The Turtle Hospital, and seeing the great work they do there. They have released over 1000 rehabilitated sea turtles back into the wild since 1986. Sometimes they invite the public to release events — they just released two turtles on February 14th. Keep an eye on The Turtle Hospital Facebook page to keep up with the latest news.

See something odd happening on the back end of this turtle? What’s that coming out of the rear left leg? This morning at Lake Lotus Park in Altamonte Springs, Arthur and I stopped along the boardwalk to watch a small Red-eared Slider struggling to climb onto a floating log. Once it clawed its way onto the the log, it started walking as if it had something on its plastron which prevented its back legs from reaching the surface at the correct angle or position. The turtle slid back into the water but when it climbed back onto the log moments later, it still had the same problem. As we continued to watch we finally noticed that it had a rather large leech stuck to its body.

It appeared to be scooting around the log to try and remove the leech. This video shows the turtle’s first ascent onto the log and a couple of moments of subsequent leech-scooting.

It is very common for turtles to carry leeches. I had no idea of this before today. In Googling for information about turtles and leeches, I came across an older post from one of my favorite Florida bloggers, who wrote: “It’s extremely common to find leeches on turtles in Florida. In fact, it’s so common, that if I had to go collect a bunch of leeches, I would start flipping turtles.” Well, how about that? Leeches survive by attaching themselves to a host animal and sucking blood. When turtles bask in the sun, sometimes their leeches dry up and fall off. Good luck little slider, and thanks for today’s new thing learned.