My Cat Catches a Bird by EvanLovely, Creative Commons on Flickr

Outdoor cats, whether feral or part of a household, are a big problem for our wild birds. Scientists estimate that cats kill hundreds of millions of birds each year. There are an estimated 60 to 100 million feral cats in the United States, according to Stray Pet Advocacy. The average lifespan of a feral cat living on her own is less than two years. While a cat who is being cared for has a longer life expectancy, pet cats who are allowed to roam outdoors face many of the same dangers as short-lived feral cats: predation by dogs, coyotes, and other animals; traffic collisions; contracting FIV or other diseases; becoming lost; and other dangers. House cats are not native to North America. A cat taking any prey here is not nature in action. Mute Swans are a rather common sight here in the Chicago suburbs. They live on residential lakes, forest preserve wetlands, manicured corporate ponds. They are not native to the American Midwest, however, or even to North America.

Mute Swans are native to north central Eurasia, and we saw them all the time in the Netherlands, when we lived there. 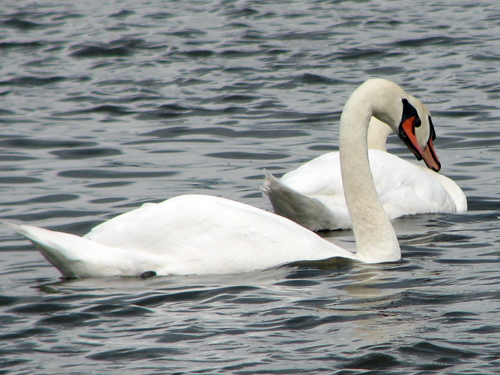 Mute Swans living outside of their native range here in North America are likely descended from ornamental escapees. Where breeding populations exist, the large birds may pose a threat to native waterfowl.

Mute Swans are large birds, weighing about 22 lbs as adults. As cygnets they are grey; plumage develops from into nearly overall full white once they reach adulthood. Adults have a bright orange bill, while juveniles have dark bills.

Like the population of native Mute Swans in Europe, some of the Mute Swans here in the United States migrate, while other populations remain year-round. Here in the lower Midwest, Mute Swans remain all year. The same is true for much of the European population, including the birds we saw in the Netherlands.

Mute Swans are not a federally protected species in the United States. Mute Swans were at one time protected federally under the Migratory Bird Treaty Act, but in 2005 they were officially declared non-native by the Department of the Interior.

I’ve had Mute Swans on my mind after speaking with different people about them earlier this week. I was surprised to hear some misconceptions about these large waterfowl, so I wanted to share a short post about them. If you want to learn more about Mute Swans, Cornell’s All About Birds is a wonderful resource.

Six Nandus escaped from a farm in Germany eight years ago and began to breed in the wild. The Nandu is also known as the Rhea and stands five feet or taller and weighs 70 lbs or more. They are native to South America and are sometimes referred to as the American Ostrich.

The group of at least 30 feral birds is breeding in a nature reserve south of Luebeck. There is little doubt they are having an adverse affect on native wildlife, but as of now it is illegal to shoot or hunt them. The flightless birds are expanding their range towards the east. Read more here.

The increasing population of wild, feral raccoons living in the Netherlands is a serious threat to Dutch bird life, according to AAP, a sanctuary for exotic animals. The center, located in Almere, is currently caring for over 20 raccoons, its maximum capacity.

Raccoons are an invasive species not native to Europe. Groups are established in the wild in Drenthe, Groningen, and other locations. They are omnivorous, eating everything from shellfish to fruit. They also dine on the eggs of prairire birds, waders and waterfowl.

The masked animals are descendants of escaped or released pets, many originating in Germany.

Dutch bird researchers hope to learn more about how local groups of feral Rose-Ringed Parakeets survive the cold winters of the Netherlands. The parakeets have lived wild in the Netherlands since 1968.

The first wild birds were noticed in the Ockenburg area of the Hague in 1968. Today large populations of the birds live around big cities like Amsterdam and the Hague and outlying urban areas. We have seen them around Leiden as well.