I found a few banded or marked birds last month. I always find it fun to learn about these specially marked birds, their journeys and life histories. It’s also interesting to learn how scientists are using the data in their studies.

On January 5th I walked along the beach at Ponce Inlet for a while during Arthur’s weekly volunteer shift at the Marine Science Center. During my walk I found four lime-green flagged Red Knots. I reported all of these to http://www.bandedbirds.org. When flagged birds are in this database, you can see the reported resighting data immediately, which is neat. Here are the birds I found at Ponce Inlet on January 5th:

Red Knot T2T was first captured and banded on May 16, 2008. That means it was at least six and a half years old when I found it! It was banded in New Jersey and subsequently resighted many times, in New Jersey, South Carolina, and Florida.

Red Knot 2E7 was first captured and banded on April 1, 2014, in South Carolina. The bird was reported in Ontario in July of last year before my sighting at Ponce Inlet. 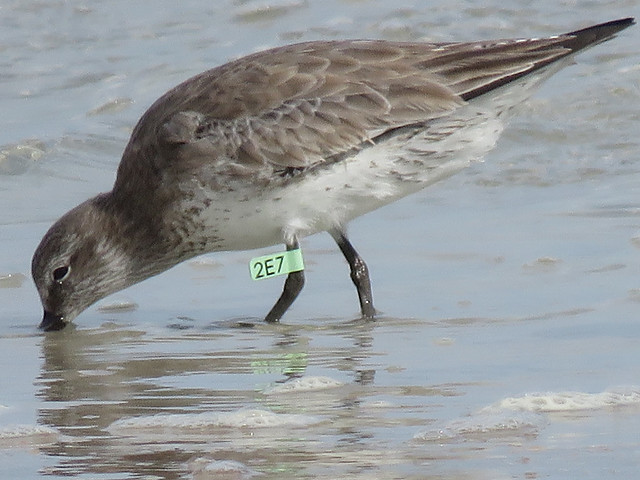 Red Knot 9PU was first captured and banded on May 14, 2010 in New Jersey. It has since been resighted in New Jersey, Georgia, Delaware, South Carolina, and Florida.

Red Knot 2YJ was first captured and banded on May 16, 2010, just two days after 9PU, at the same location in New Jersey.

Since these birds were all foraging together in a larger flock, I was curious if they have been reported together elsewhere. On November 10, 2011, both 9PU and 2YJ were seen at Wolf Island National Wildlife Refuge in Georgia. On the same day, T2T was still in New Jersey. The following spring, T2T was in South Carolina on April 20, while 2YJ was still down in Florida. On February 14, 2014, 2YJ and 9PU were both reported in Ponce Inlet. There are a few more instances two or more of these birds being reported together. That’s pretty neat!

On January 10th my parents joined my husband and me for an afternoon at Merritt Island National Wildlife Refuge. We found a wing-tagged Black Vulture. Here’s a terrible photo. 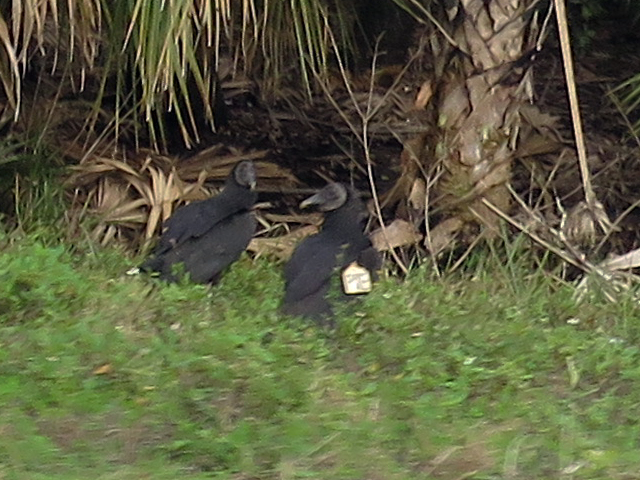 The wing tag reds PXE. The bird was located along Kennedy Parkway close to Wilson’s Corner, loafing with a group of about 12 other vultures. With a quick Google search I found out about an ongoing study of vultures by the NASA Environmental Management Branch. I sent in the information and was thanked for doing so; unfortunately I didn’t learn anything more about this wing-tagged bird but presumably the birds in the study are year-round residents of Merritt Island.

On January 19 I again walked the beach at Ponce Inlet while Arthur was volunteering. I found a few more flagged Red Knots and three color banded Piping Plovers.

I reported the Piping Plovers, but I haven’t heard anything back yet.

UPDATE 2/6/15: Luck would have it that just days after I posted this, I heard back from the Great Lakes Piping Plover Conservation Team about all three of these birds. Updates in red: 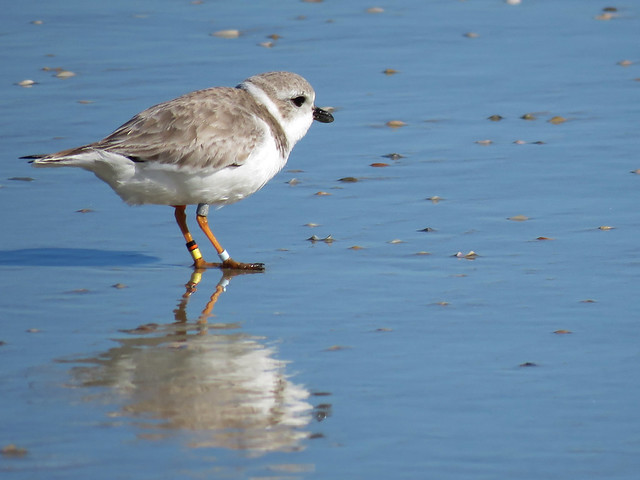 This bird “was captive-reared after his nest washed out in a big wave at Sleeping Bear Dunes National Lakeshore in 2012.” The eggs had to be recovered; 3 of the 4 were found after diligent searching. The eggs hatched and the healthy chicks were raised until they were flighted. They were eventually released close to the site where the nest was washed out. This bird was given the nicknamed “little Cooper”. 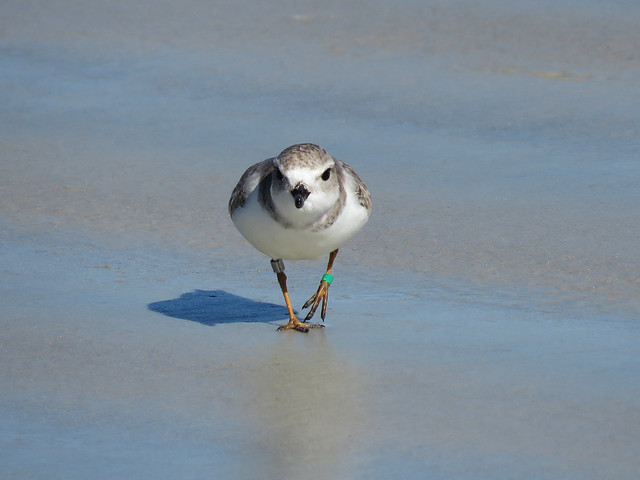 This is another bird from the Great Lakes Piping Plovers population. It hatched in 2014 at Apostle Islands National Lakeshore in Wisconsin. 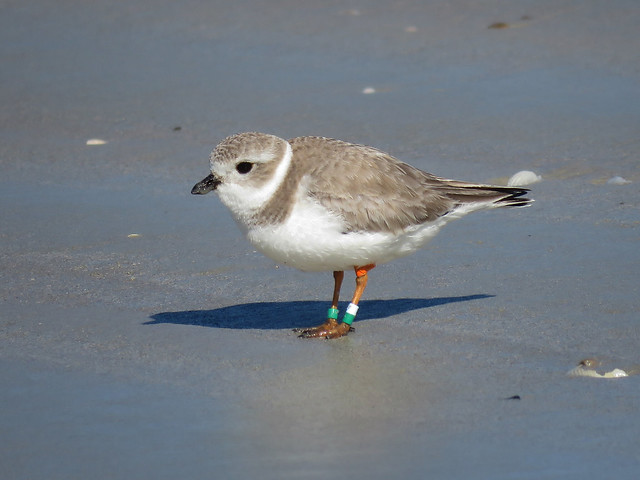 This Piping Plover was hatched in 2009 at Sleeping Bear Dunes National Lakeshore in Michigan. Since 2012 she has been seen nesting in Gulliver, in Michigan’s Upper Peninsula.

I also found and reported six different flagged Red Knots in three separate flocks over a 3-mile stretch of beach.

Red Knot 047 was first captured and banded in September 2009 at Monomoy National Wildlife Refuge in Massachusetts.

Red Knot 038 was first captured and banded in September 2009 at Monomoy NWR.

Red Knot 2A1 was first captured and banded in September 2011 at Monomoy NWR. 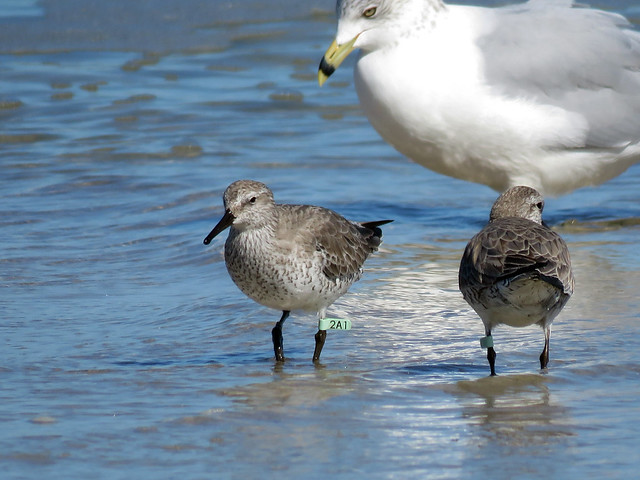 Red Knot TNV was first captured and banded in November 2005 in Avalon, New Jersey. This bird is at least ten years old and has been resighted many times over the years up and down the east coast of the United States.

Red Knot V5M was first captured and banded in March 2011 in South Carolina. I’ve seen V5M before, at the end of 2013 during the Daytona Beach CBC.

Finally, also on January 19, I found another bird I’ve seen before. F05 has returned to Volusia shores once again! Now he’s even more famous — he’s been immortalized by Birdorable! 😉

Nestling Superb Fairy-wrens learn unique begging calls from their mothers — before they even hatch. Researchers “conclude that wrens use a parent-specific password learned embryonically to shape call similarity with their own young and thereby detect foreign cuckoo nestlings.” In other words, the baby birds must chirp a secret password to be fed. Some interesting news about the side-effects of attaching or implanting location transmitters on birds. This is from bird researchers at the University of Groningen, roughly translated from this article. Twelve female Black-tailed Godwits fitted with transmitters last May were unable to successfully breed this year. The birds, which are a threatened grassland species, did attempt to mate, but the transmitter worked inadvertently as a birth control device (IUD). The data was reported last week by Theunis Piersma of the University of Groningen in the NRC Handelsblad newspaper.

Scientists from the University implanted the transmitters, which are like small radios, inside fifteen female godwits. The purpose of the study was to learn more about the exact migration route of birds. The birds breed in Friesland, in the north part of the Netherlands, and migrate to southern Europe and Asia for the winter.

Although the study yielded a wealth of information about the migration habits of the birds, researchers were very disappointed with the inadvertent side effect it had on the birds’ lack of breeding success. One bird did lay eggs, but the eggs were deformed and did not hatch.

Via the work with the implanted godwits, the researchers noted that three of the birds flew more than 5,000 km non-stop, averaging 70 km per hour.

Researchers have found that bird species known as “white-eyes” develop faster than other species.

DNA analysis reveals that all 80 species of white eyes emerged in the last 2 million years.

A handful of other birds and mammals have been known to adapt to new environments in such short order, but white eyes are unique because their speciation isn’t a simple reaction to shifts in local habitats, said study author Christopher Filardi.

“White-eyes evolved into dozens of new species extremely fast while simultaneously spreading across much of [the southern] hemisphere,” he said. “At this geographic scale, there is no one thing from the outside that could have made this happen; there is something special about those birds.”

White eyes may evolve faster, in part, because females can start breeding as young as four months old. It takes most tropical songbirds closer to a year to reach sexual maturity, Filardi explained.

And unlike most birds, white eyes are hardwired to be social. They forage, travel, and even preen together, making it easier for them to colonize, according to the study. I’ve been trying to find a list of bird species that can be found on all continents except Antarctica, and this has proven rather difficult. There’s a short article on Wikipedia that explains that a species is said to have a cosmopolitan distribution if it can be found almost anywhere around the world. It then gives some examples such as the Painted Lady butterfly, Brown Rat and of course Humans. I’ve started to make a list of bird species and came up with the following so far:

The last two are obviously introduced to several continents by humans, but I’ve included them in the list because they are breeding in the wild in significant numbers, and the list is already so short! Surely there must be more species then this.

What other birds can be found on all six continents? Can you help to expand this list?

“Two sub-species of a singing bird have met in Tumbler Ridge, B.C. the first sighting since the eastern and western winter wren split apart during the last Ice Age. Up until last year, scientists weren’t even sure if the two populations co-existed since nobody had ever been able to find their elusive contact zone.” Read about the discovery by zoology professor Darren Irwin at Canada.com.