A small gang of Dark-eyed Juncos seem to be visiting our yard every day. They prefer to feed on the ground. The other day I observed one perched on the fence at the back of our yard, and he seemed to be looking at our hanging feeders. He made two sorties around them, appearing to pause by two of the feeders as if to land, but he continued flying and returned to his spot on the fence. I don’t know what was really going on, but when I told Arthur about this behavior I joked that our Juncos don’t know how to ‘use’ bird feeders and that’s why they are always eating on the ground. Yesterday when we were looking at the House Finches we saw this Junco perched on the fence behind them: My first thought was that the Junco was amazed to see how other birds actually eat right there on the feeder. What a concept! Check out how he’s straddling two fence posts just to keep upright in what must be an extreme state of shock – too cute!

A Peregrine Falcon named Esteban Colbert, after Stephen Colbert’s alter-ego Esteban Colberto, has taken up residence at the San Jose City Hall. Colbert (the falcon) has been seen with Clara, a Peregrine who has starred in the City Hall’s Falcon Cam for the last two years.

In the third “season” of her ongoing reality show, falcon mother Clara has another new man in her life and, based on field reports, is expected to soon make him a father.

Clara has quite a history with the males.

As it became apparent that last year’s tiercel (male falcon) Carlos was not returning for a second season, falcon fans have been watching the FalconCam to see if a new beau would attempt to woo Clara.

“I’m delighted that Esteban Colbert appeared at City Hall this week, and that he and Clara are hitting it off,” said San Jose Mayor Chuck Reed, who press reports have noted is an avid fan of “The Colbert Report.” “Like the City Hall falcons, the original Colbert has proven that with primitive instincts and sharp talons, anyone can survive in modern society.”

Read the whole article here and find out more about the San Jose Falcons here.

Here’s Stephen talking about other animals and things named after him:

This clip of Conan O’Brien birdwatching in Central Park with a group of birders aired earlier this week. The actual birding took place in the spring of 2005. I’m not a huge Conan fan but I laughed during this segment. I think he’s a bit more respectful than Steve Carell was when he joined some birders during the WSOB.

I just came across this old clip from the Daily Show about the World Series of Birding. The 2009 WSOB will be the 26th edition and will take place on May. Here’s the Daily Show’s take on an earlier WSOB, with correspondent Steve Carell.

Update March 2012: This video may no longer be embeddable. Click on the screen-shot below to view the video on the Daily Show website. 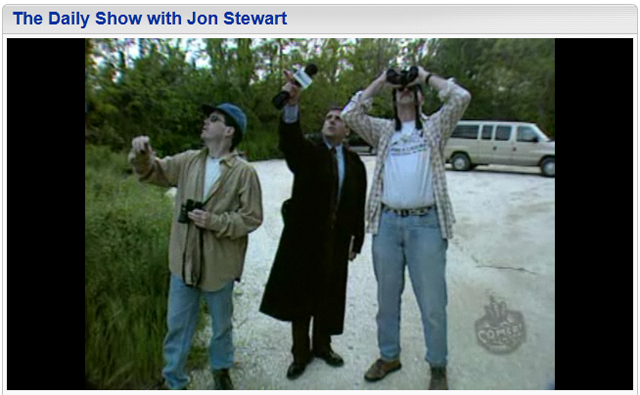 Check out this post over at Urban Hawks. Think this trick would make the Ibis popular at parties?