Back in October, I visited Big Tree Park in Longwood, along with Arthur’s family. It was a short visit; we went to see The Senator, a cypress tree estimated to be around 3,500 years old, and its younger compatriot, Lady Liberty.

In between viewing the trees and being eaten alive by mosquitoes, I spied a Gopher Tortoise walking beside the boardwalk among the rich, wet vegetation. It seemed a strange place to find a tortoise. I then noticed a man and his daughter talking to the animal, wishing it well. I asked them about the tortoise and the man told me that they had just rescued it from a busy highway. They always brought rescue ‘turtles’ to Big Tree Park, and set them free by the little pool of water where I first saw the tortoise. 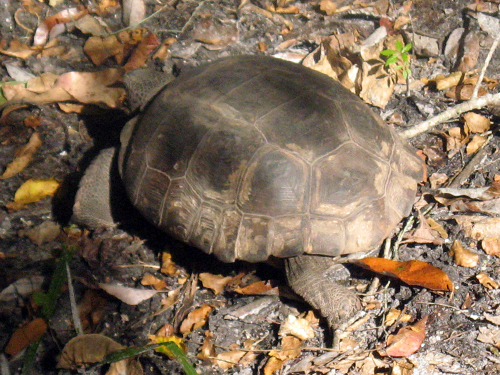 The Gopher Tortoise, before it scooted out of sight (photo by Ineke de Wolf)

I don’t know enough about Gopher Tortoises, but I know a little. The main thing I know is that they live in dry habitats, not swampy forests, not in the kind of wet place where cypress trees thrive. About turtles I know this bit of conventional wisdom regarding rescue – if you help one that’s crossing a road, bring it to the side it was heading towards. By all means, if possible, leave it be, or leave it close to where you found it.

I don’t know exactly where this family found their tortoise, only that it was by a very busy road or highway. Big Tree Park has some standing water and marshy habitat. In my ignorance it does seem like a fair place to release land turtles that are not tortoises (so Eastern Box Turtles) that have been found in unsafe places.

I watched the tortoise truck away from the boardwalk and disappear, and I wished it well. I hope it found a suitable place to be what it is. Then I went and had a talk with the father and his daughter and their turtle rescue habits. I explained that all turtles are not the same, except that they should all be left alone as much as possible. I told them that they had brought a tortoise to unsuitable habitat… for future reference. I don’t know if I made a difference, but I had to try.