The seventh MAPS banding session at Rollins Savanna this season took place on Thursday, August 5. This was the final session in the ‘regular’ MAPS season, although the team did run the station one additional day (when I was unable to attend – August 17). 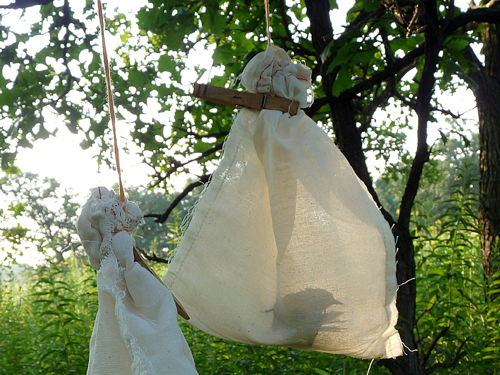 We had a bit of excitement in the form of several members of the press stopping by to observe us, interview a few of the banders and Lake County Forest Preserve personnel, and take lots of photos. Stories were published by the Pioneer Press (which also posted a very nice video) and Daily Herald. 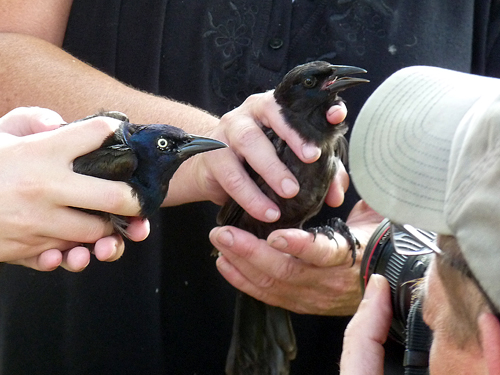 The other non-bird issue of note that morning was the utter misery brought upon everyone from the mosquitoes. They were the worst I have ever seen them (I could have said that on each session; they got progressively worse as the season wore on, culminating in the total mosquito nightmare on August 5th), and were attacking us even while we stood in the normally relatively bug-free parking lot before we headed to the banding station. We all sprayed bug repellent on ourselves but it was of almost no use. The back of my legs were especially tasty (or not especially covered in bug spray) judging by the amount of welts found there later in the day. In fact, area mosquito populations exploded in early August and continue to abound locally.

Although the nets were not particularly busy, we did have some firsts for the season, including a Yellow Warbler and a Warbling Vireo. I banded a juvenile Common Yellowthroat and an extremely cute juvenile American Robin. We also had juvenile Common Grackles and a couple of recaptures. 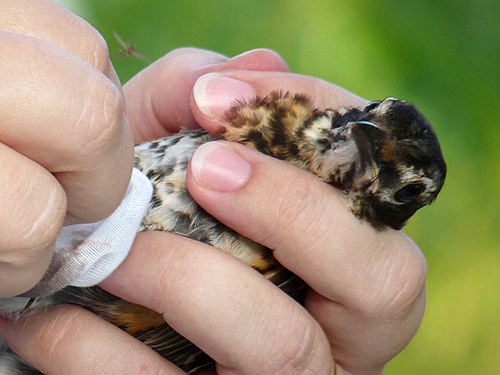 Another first for the season was a Tennessee Warbler, an early migrant that breeds further north. The MAPS program is primarily for recording breeding bird data, so when the migrants start coming through again, the MAPS season is winding down.

As it was the last session I would be attending, I brought a few small gifts for the banders and my fellow volunteers. I gave this iBand tote bag to our permit holder, Dr. Cynthia Trombino. Here’s a picture of the bag on the banding station table at the end of the day. Finally, I geeked out a bit when someone found this deer skull along the mist net trail. Very cool!