Much to my chagrin, I have zero owl-finding skills. So this post’s title isn’t really 100% accurate. Something like Baby Barred Owls make so much noise I can’t help but find them might have been more appropriate. Anyway…

On April 10th I was birding at Gemini Springs, taking my usual route over the spring run bridges on my way to the path that runs along DeBary Bayou. While crossing the second bridge, I heard the unmistakable hissy begging call of a baby owl. Naturally I followed the sound, which had me take a right after the bridge and head into the woods. A few minutes later, I sent a text message to Arthur. 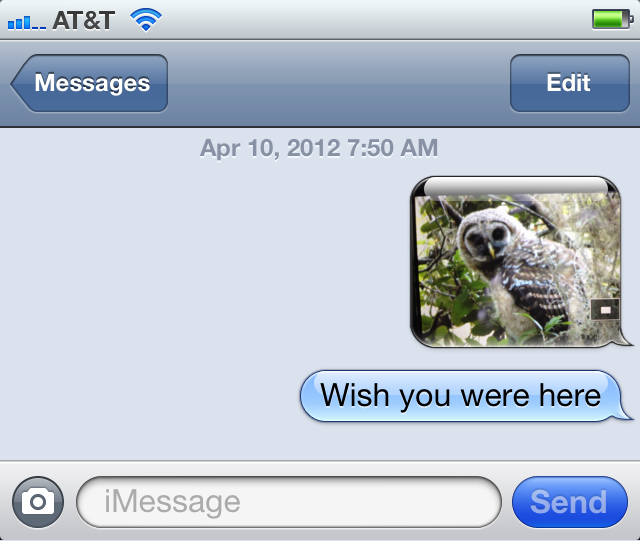 So even though I’m lousy at finding owls, two hungry babies taking turns crying for food are hard to miss. I had located two branching babies but no adults. After I sent the text and took a lot of photos of the two babies, I continued on my walk.

Before heading to my bike, I went back into the woods to see if I could relocate the owls. This time I found one of the adults perched beside a baby. I texted Arthur again and he indicated he was on his way over, so I sat down to wait. That’s when I saw the second adult bird fly in to deliver a green anole to one of the babies. After the delivery, the adult perched nearby. Of course I took more photos, which is what I was doing when Arthur joined me. I can hardly begin to describe how happy I was to find and observe these owls. I had only seen a handful of individuals before that morning, so discovering and observing this family at length was a tremendous treat (made even more wonderful when Arthur joined me).

The next morning, April 11, Arthur and I headed back to Gemini Springs, but we were only able to locate one baby owl. During a visit two days later, on April 13, I found one baby and one adult. I guess you can tell I can’t get enough of these beautiful owls. I have returned to Gemini Springs to look for the owls (and other birds!) a few more times in the last weeks. I’ll have some more photos to share in the coming days (you have been warned!).

One Response to I discovered a Barred Owl family at Gemini Springs!