I’ve been keeping an eye on the American Robin nest in our front yard. Earlier this week it was pretty windy, but she held tight.

Since we’re going away for a few days, I wanted to check inside the nest once more before we leave. I had planned to check today, but the forecast of relative cold (mid 40s°F) and rain didn’t seem ideal. Still, when I looked at the nest about a half hour ago, I saw Ma Robin wasn’t on, so I quickly grabbed the ladder and my camera and had a quick peek inside the nest.

It looks like two chicks are just hatched, while one egg remains intact (I had estimated hatching would be between May 9 and May 12). Ma Robin started to chip at me after a half minute so I got out of there fast (you can hear her at the end of the video). By the time I got back inside the house, she was back on the nest. American Robin chicks fledge at approximately 13 days so we should be able to watch them a bit more in the nest.

I was so excited to see an American Robin busy building her nest in our front shrub last month. When I was growing up, my parents always had birdhouses on our property — but I’ve never had the chance to see inside an active nest before!

I could see her flying in and out of the tree several times during the day, and I wondered about her placement choice. There’s not a lot of traffic at our front door (we often go via the garage), true. But I wondered about the bright porch light we leave on all night, which shines right into the shrub, pretty much at nest level. Early last week I taped a covering over one side of the fixture, so we still have the security of the light — but it shines much less brightly towards the nest. 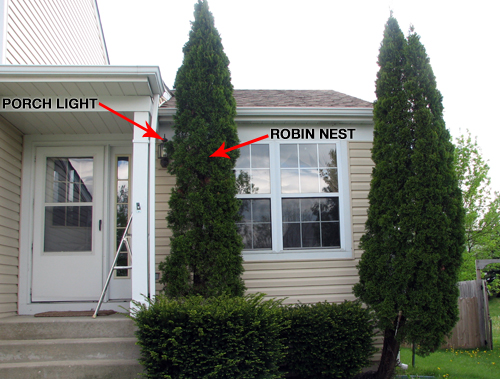 I first saw her sitting more or less constantly on the nest sometime in the middle of last week. Since then we have noticed that she doesn’t fly off if we use the front door. We can see her from inside the living room, if we crouch down to peek through the foliage. See her? She’s right in the middle. (Click to embiggen)

With my camera’s zoom I can get a little better view. Last week I registered the nest site with Cornell’s NestWatch, a citizen-driven nest-monitoring project. The site has instructions and tips for observing active nests, and participants are required to become certified (by completing an online quiz) before joining the project. There are also datasheets for the focal species, which includes the American Robin.

Yesterday afternoon I briefly checked the nest. The robin was still incubating when I came outside, and I could see her (once I crouched down). The underside of Ms. Robin’s tail. (Click to embiggen)

Soon after I started talking and fussing with my ladder, she flushed off. Four eggs are usual, but American Robins will lay 3-5. I reached over with my camera to take this photo inside the nest. The robin was back incubating within about 15 minutes. American Robins incubate for 12-14 days; I estimate the eggs were laid April 27-28 so there should be nestlings some time between May 9 and May 12.

I continued to follow the nest during the following weeks. For further reading: Teeny tiny baby American Robins!!! | Quick robin nest update | These birds have flown

I love this peanut feeder my dad made out of firewood. The woodpeckers adore it and they are so fun to watch when they attack the shells to nom the peanutty goodness inside.

I tried to take a still picture of the above Downy Woodpecker but he was too fast. 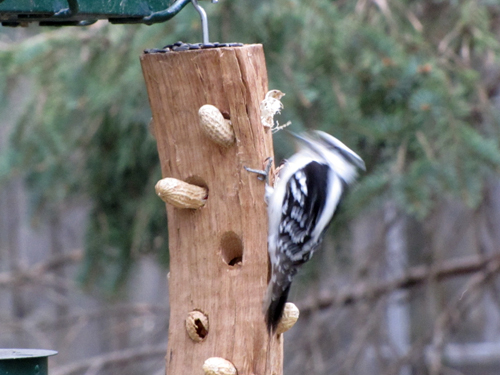 Migration is on! Woodcocks are peenting, Red-wing Blackbirds are konk-la-reeing, Sandhills are bugling, Purple Martins are scouting. Birds are on the move and their songs are filling the air once more.

And the hummingbirds are coming! If you’re looking forward to the return of Ruby-throated Hummingbirds, as we are, keep an eye on the annual migration map at hummingbirds.net.

Here’s a sweet sign of spring. These two Mourning Doves were having a date on our patio yesterday afternoon.

Yesterday I was looking for a new spot to go birding for my birthday. Although we’re close to the border with Wisconsin, I’d never really thought about looking into Kenosha Co. parks or preserves before. I did a little Googlin’ and found that the Pringle Nature Center in Bristol was just a half hour drive from our house. So this morning we set off to do a little leisurely Wisconsin birding.

Upon arrival at the Nature Center’s parking lot, we donned our cold weather gear and slung on binoculars and camera. We entered the large facility and the first words I heard were, “Are you here to see the Tufted Titmouse?”

Now, TUTIs range through northern Illinois and Wisconsin and beyond, but they are kind of rare in our county. Looking at eBird, there were a handful of reported Tufted Titmouse sightings in Lake County last year over four different months. There were even fewer sightings in Kenosha County in 2009. Bottom line, we don’t expect to see TUTIs when we go birding locally. So the question from the Nature Center staff member was a welcome one, indeed. Apparently a Tufted Titmouse has been visiting the feeders at Pringle all winter, and it had been seen earlier this morning. We didn’t have to wait long before we saw the little cutie ourselves. 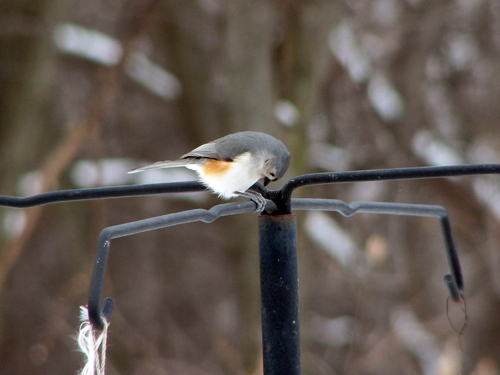 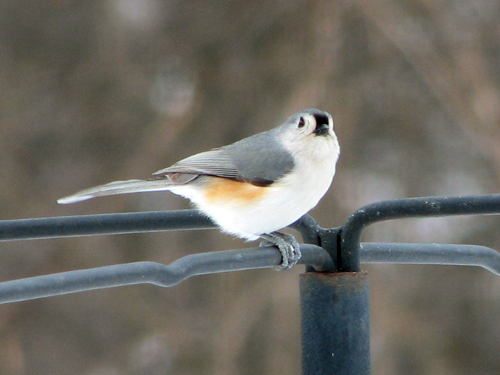 After watching the feeders for a while we headed out on the trails for a slog through the wet, heavy snow. There are over four miles of trails through the Bristol Woods County Park adjacent to the Nature Center. 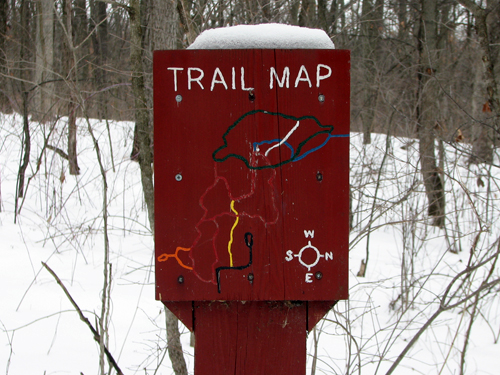 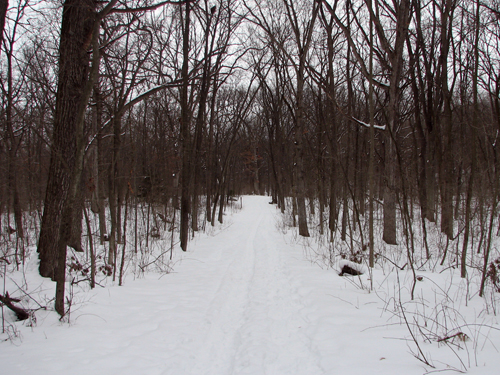 We saw few birds on our walk but we saw many exposed nests in the bare trees. I bet this is a great place to bird in the spring and I’m sure we’ll be back to check it out. We walked about 1.6 miles before returning to watch the feeders some more. For the visit we saw 12 species, most at the feeders. 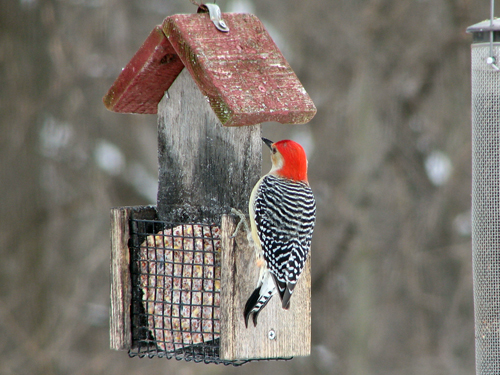 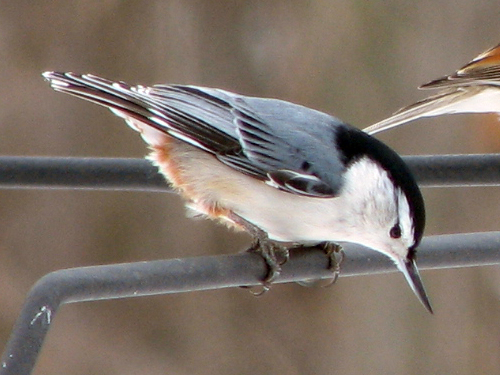 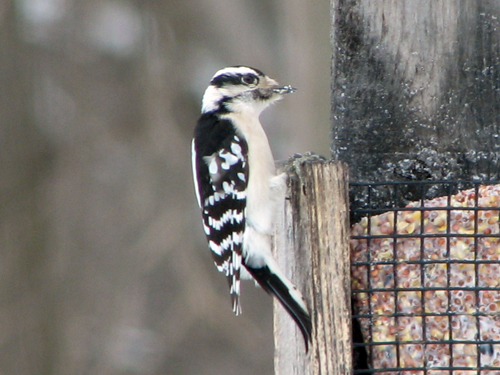 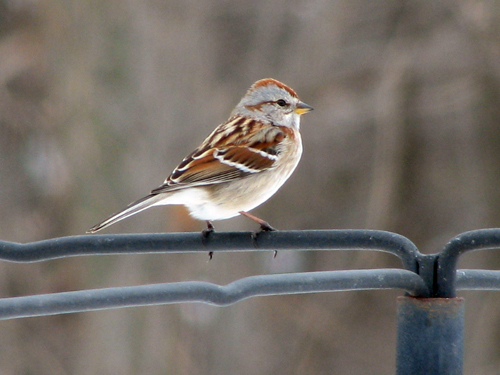 What a great birthday treat to find a great new birding spot plus a totally unexpected bird! 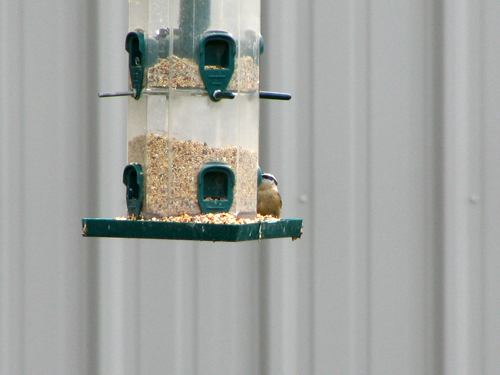 Yank-yank! Who was that masked beauty?! 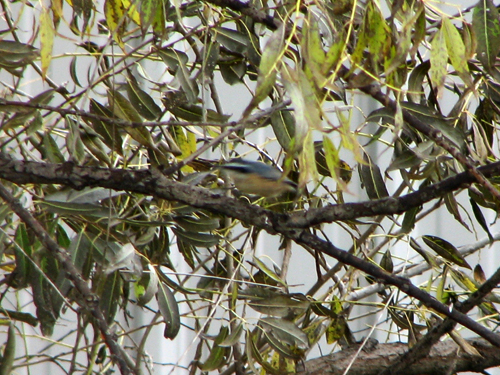 Why, it’s a Red-breasted Nuthatch – our latest yard bird. Welcome! Maybe you’ll pose for a nice photo next time?

Warning: Graphic images of a hawk eating prey below

Our friendly neighborhood songbird terrorist has been making more frequent visits to our back yard. I’ve seen ‘our’ Cooper’s Hawk almost every day this week. One day I was filling the feeders when I stopped to examine a pile of grey feathers on the ground. I suspected Coop got one of our fat juicy little Mourning Doves and was calling back to the house to tell Arthur, when suddenly I saw a big shadow out of the corner of my eye. A Cooper’s Hawk took off from the grass path behind our fence, and I was fairly awestruck. Just moments later, as I was facing the house and talking to Arthur, he saw *another* Cooper’s Hawk take off from somewhere behind the fence. Two Coops at once?! Oh my.

Usually we can tell the hawk is around by the lack of birds at the feeders. Often we can then find Coop in the tree behind our yard, scoping for prey. Although he usually keeps a low profile, a couple of days ago we were surprised to find him perched on our large T-shaped feeder pole. On one side of the pole we keep a suet log which is favored by Downy Woodpeckers. There was Coop, king of the yard, perched on the highest pole. And there was Downy, frozen on the side of the log facing away from the hawk. Oh, how I wish I had gotten a photo of that! Coop finally took off flying to the right, and the Downy zipped around to the other side of the log in the same instant, in the blink of an eye. Here’s Coop perched on the post, without any frightened birds hiding below. 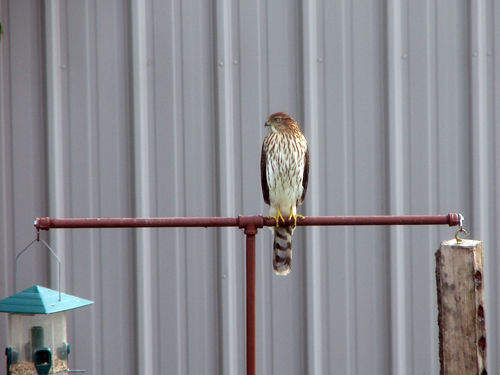 Yesterday Coop caught a House Sparrow and proceeded to eat it on one of our fence posts. This was the first time we’d actually seen the hawk eating, even though we’ve seen piles of feathers on the ground several times, indicating at least a scuffle if not an outright kill. Final warning: Graphic images & video of a hawk eating prey follow.

First there was a lot of plucking. Then came the eating. Soon a squirrel came and disturbed the hawk. First it seemed to be mantling over its prey; finally it flew off with lunch in talons. 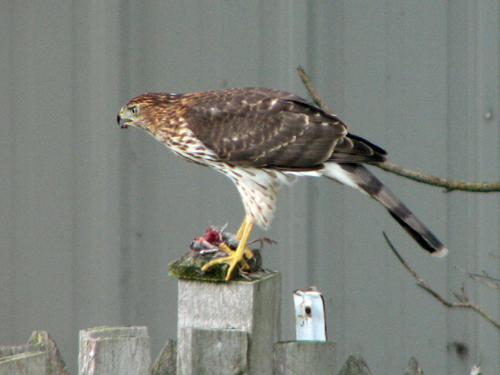 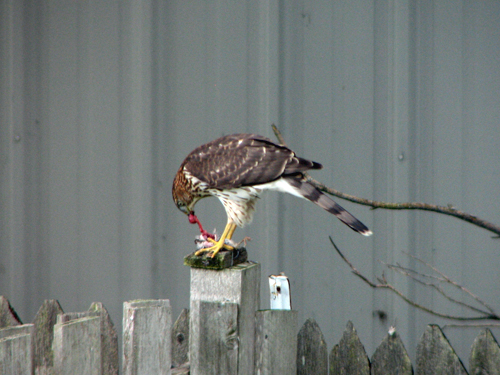 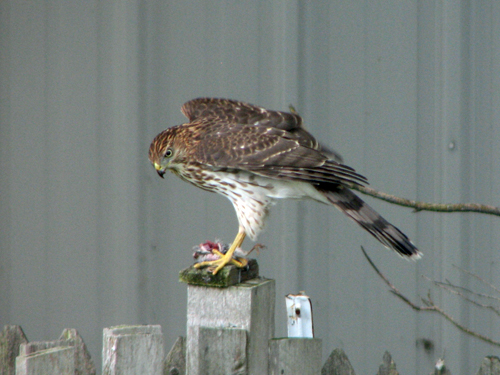 This poor Downy Woodpecker’s got an identity crisis. She thinks she’s a finch. Why else would she be going to town on a finch sock? 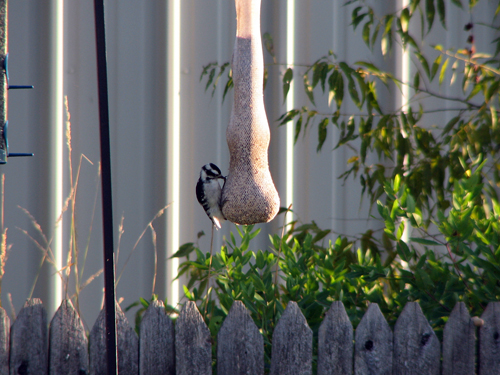 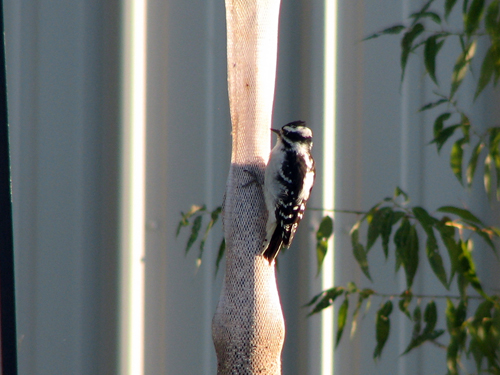 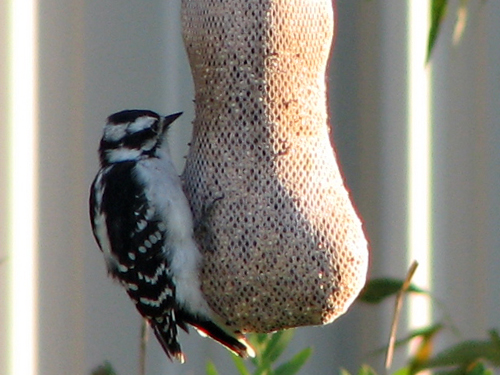 As we were migrating to Camp Sagawau, we heard that Vern Kleen was starting his talk on hummingbirds. When we arrived, there was already a crowd of hummfans listening to Vern. 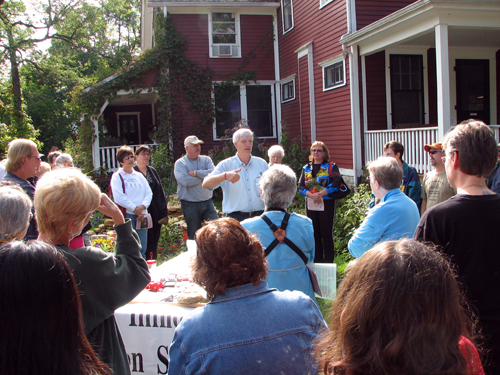 Vern Kleen is one of two licensed hummingbird banders in Illinois. Throughout the summer he has conducted banding demonstrations – after the last fest on September 5th he will have done sixteen hummingbird festivals throughout Illinois!

Vern told us all about hummingbirds, from banding and how to attract hummingbirds to back yard feeders to facts & figures and all about hummingbird behavior, as well as taking questions from the crowd. We learned that there are approximately 340 species of hummingbird. 25 of these have been seen in the United States, but just the Ruby-throated is a regular in eastern North America. Ecuador is home to over 160 different species!

As Vern was speaking, members of Illinois Audubon were busy with two hummingbird traps. Normally there are 10+ hummingbird feeders set up at Camp Sagawau, but during the festival they were all removed except for two which were used for trapping the hummingbirds for banding. Spectators watched the feeders, waiting for a bird to fly inside. The traps are hanging on either side of the large tree just left of center: 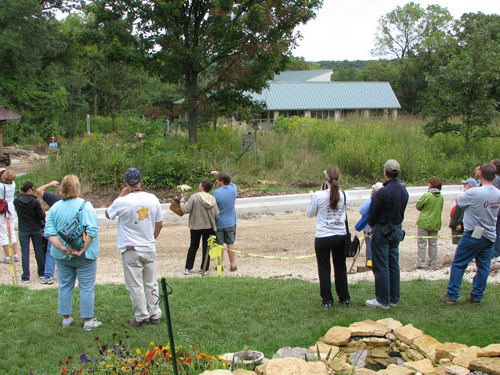 The doors on the mesh traps were rigged to close on a remote control similar to remote lock devices for cars. Here’s a closer look at an open trap: 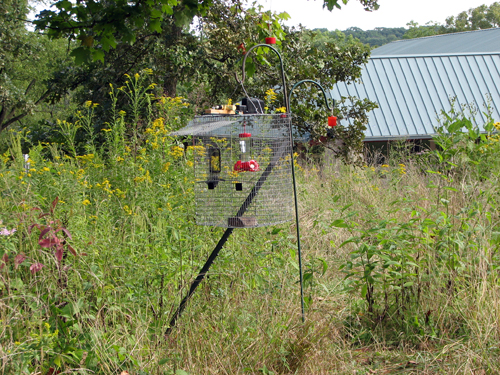 Because there were normally so many feeders at the preserve, there was no shortage of hummer activity. However, the trappers had to be careful and not trip the door until the bird perched on the feeder. Hummingbirds flap their wings up to 100 times per second and fly 25-30 miles per hour on average. Male birds can reach speeds of nearly 60 mph during courtship display dives!

Once the bird entered the trap and was actually perched on the feeder inside, the chance of them flying into the trap door as it was closing was greatly reduced. Here’s a male bird (notice the ruby throat) caught in one of the traps: 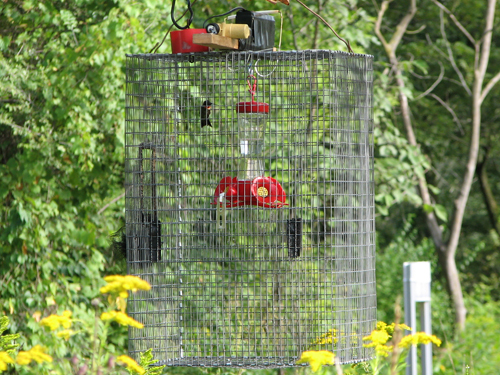 After capturing a bird in the trap, the next step was to remove the bird from the trap. A net ‘sleeve’ allows the trapper to get his or her hand into the cage without the bird escaping. Still, it’s a delicate procedure and patience is needed in order to avoid extra stress on the bird. Here’s a video of a bird being removed from the trap:

Next, banding a hummingbird!