In late March Arthur and I were asked to release three birds after rehab with Flint Creek Wildlife Rehabilitation. A Cooper’s Hawk that was hit by a car in Chicago needed to be released close to where she was first recovered, and a pair of Mallards were to be released at a site Long Grove.

We picked up the birds at the FCWR Itasca facility in the morning, and placed the carefully labeled boxes in the back of our car. First we released the Cooper’s Hawk. With these birds, I learned that you typically just have to open the carrier and they’re gone in a flash. This big girl was no exception.

Next we traveled to Long Grove to release the two Mallards. These were both eager to be on their way, too, although once they were in the water they seemed a lot more relaxed.

It took us a few moments to release the second duck after the first, but as soon as we did, the first duck swam right over to join his friend. With the birds released, we found we had some time to spare before our next appointment. We checked the Illinois birding listserv, IBET, using our iPhone. We learned that a Surf Scoter, first reported the day before, had been refound earlier in the afternoon in Mundelein. That wasn’t too much of a detour between Long Grove and our next destination so we headed over to St. Mary’s Lake in search of the scoter. We found the bird and had some nice looks (despite the lousy photo below). The Surf Scoter was a life bird for both of us. 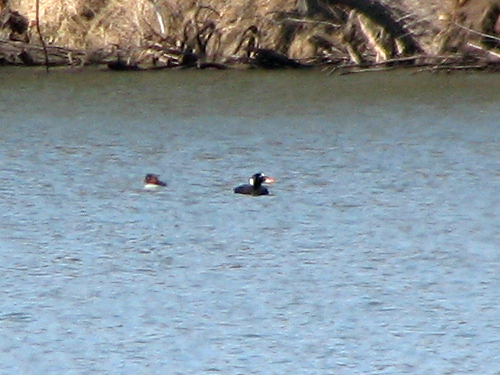 This was a couple of weeks after we released a pair of birds at Burnham Harbor and found our lifer Long-tailed Duck at the same time. I wonder what we’ll find next time we release rehabbed birds?!

Flint Creek Wildlife Rehabilitation is a non-profit, federally licensed rehab organization with locations in Chicago, Itasca and Barrington, Illinois. You can follow their blog here, follow them on Facebook here, and make donations online here.

This entry was posted in FCWR, Life List. Bookmark the permalink.