Last summer I had the opportunity to volunteer at a (temporary) banding station at Rollins Savanna, a preserve in the Lake County Forest Preserve District. The banding station followed the MAPS protocol, which basically means we were doing a breeding bird survey. We went out approximately every ten days during the summer months. The data will be analyzed over time to look at how the habitat is being used by breeding birds, like this Cedar Waxwing we banded on June 20th. 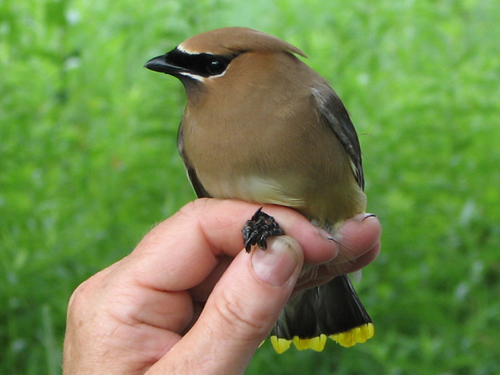 I was able to join the team at Rollins Savanna after attending a forest preserve banding demonstration in 2009 and talking the MAPS group during their 2009 season. I wanted to learn more about birds and more about the banding process. It was a great experience, I certainly learned a lot, but there is much more to learn. Now that the banding season is over, I’ve been reading more about how bird banding data benefits conservation science, and ultimately the birds themselves.

We learn about how birds age.

This entry was posted in Banding. Bookmark the permalink.