For my birthday last month Arthur and I spent the day doing a little birding and raiding a few bookstore clearance sales. We started out with a very nice walk at Grant Woods, where early Red-winged Blackbirds were singing in the grassland. It was also nice to see a White-breasted Nuthatch, which we haven’t seen around our yard for several weeks, plus a nice flock of Cedar Waxwings and American Robins nomming berries. Both of these were in the parking lot (as we were finishing up our walk, naturally).

Next we stopped at Pistakee Lake to check out the waterfowl. Near our vantage point we saw a small group of Common Goldeneye. Several males were wooing females, dramatically throwing their heads back and then diving after each other. I’d never seen this before and I was totally enchanted.

While I was scanning through huge numbers of Canada Geese, Arthur spotted a coyote on the far side of the lake, trotting along the ice. As I was watching the coyote, Arthur made two more great finds. First, he picked out a Snow Goose between the hundreds of Canadas. Then he spotted three Greater White-fronted Geese, first in flight and then refound loitering on the ice (I managed to take just one lousy picture of Greater White-fronted Geese). Other waterfowl included Mallard, scaup, Ring-necked Duck, and tons of Common Mergansers. Eagle-eye Arthur found ANOTHER coyote on the far side of the lake. This time the coyote blended in perfectly with the surrounding grasses and was impossible to see without the scope.

Shortly before we left, something spooked the geese, and many of the birds took flight. The honking was pretty incredible. After the waterfowl stop, we loosely followed the Fox River south in search of bird… books. We were looking to take advantage of the unfortunate Borders shop closings in the Chicagoland area. We decided to check out the bird sections at a few of them. It was a successful mission. 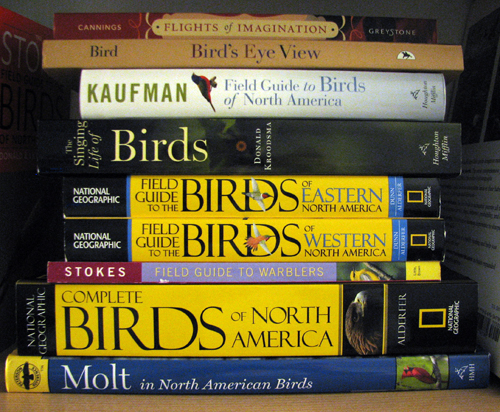 Calendars were on sale for $1. I looked for bird calenders and found only one, a wall calender simply titled, “Hummingbirds.” I was amused by the thumbnail photos on the back, one of which shows a bird that is not a hummingbird. Can you tell which one doesn’t belong? 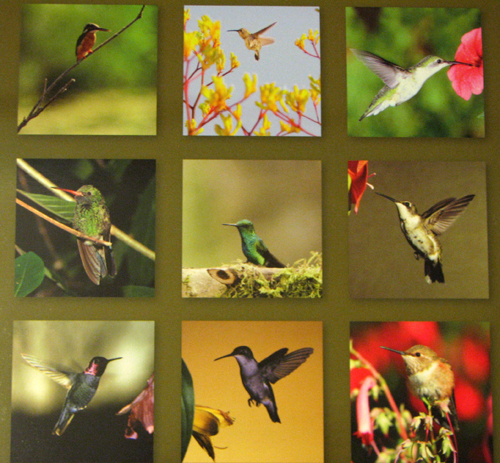 I bought it anyway. At home I noticed this disclaimer on the back… 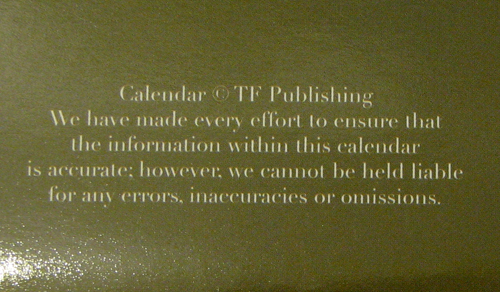 … and my dreams of suing them for millions of dollars vanished before my eyes.

This entry was posted in Birding Blooper, Books, Illinois. Bookmark the permalink.