Along with several of their resident raptors, the wildlife rehabilitators at Back to the Wild brought along some rescued, permanent resident snakes, turtles and frogs to the Midwest Birding Symposium. There was also a display with Monarch caterpillars, chrysalises and butterflies, representing various stages in the amazing life cycle of the Monarch. Several of the butterflies were tagged, and we learned about the process of monitoring Monarchs as they migrate south.

The neatest thing here was that several of the chrysalises were very dark, meaning the butterflies were nearly ready to emerge. I was very excited to be there to witness a Monarch coming out. I just missed it on the video, but you can see this is a very fresh little butterfly. 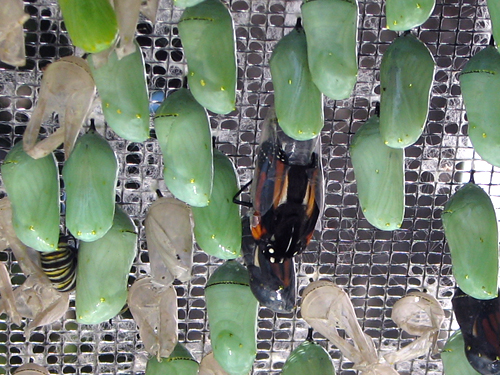 Before – just breaking out! 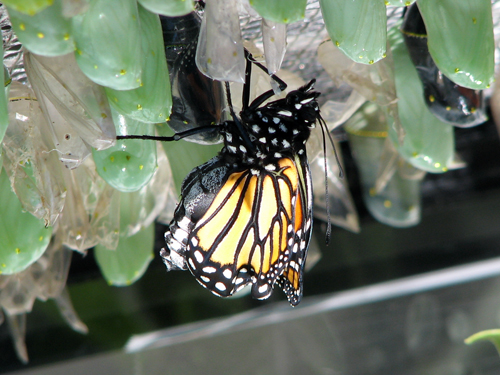 Fresh lady Monarch!
I don’t believe I have ever seen this before, and I was totally amazed. Have you ever seen a butterfly emerge from a chrysalis?

While at the BTTW display, we met a couple from California who asked if we could take their photo by some of the birds. They then returned the favor and captured the only photo of the both of us taken at the Midwest Birding Symposium! 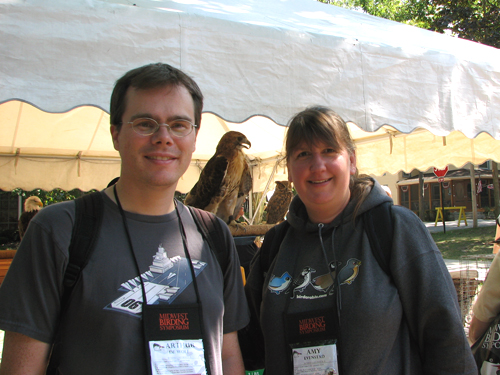