We found this Oriole nest while walking at McHenry Dam at the end of May. 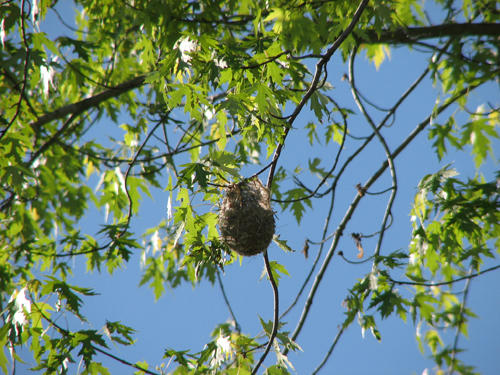 After the nest was discovered, I asked one of the outing leaders if Orchard Orioles make the same kind of nest as Baltimore Orioles. Everyone was saying we had found a Baltimore’s nest so I wondered if Orchards make the same kind. The leader wasn’t sure so when we got home I checked Cornell’s All About Birds. Baltimore Orioles indeed make gourd-shaped nests in a ‘weaver’ style. Orchard Orioles, on the other hand, make open cup nests.

When we visited the Gambia, we saw several different species of weaver.

We found a weaver nest on the ground while waiting for the ferry to cross the Gambia River at Georgetown. Arthur picked it up so I could take a photo of it. Unfortunately I don’t know what species of the 12 made this one. It was very tightly woven and the entrance was separated from the nest cavity as if it had a foyer. 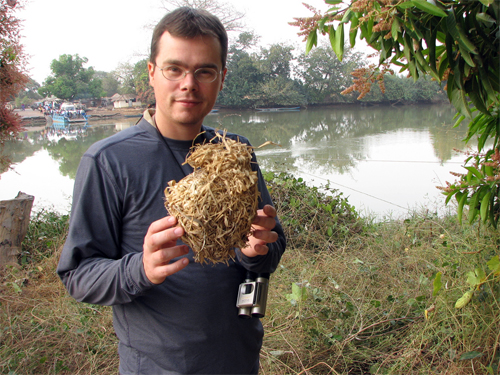 I think weaver nests are pretty neat, especially after seeing that one in the Gambia up close. Sociable Weavers are a species of weaver that live in southern Africa. Dozens of families will live in huge complex structures of woven hanging nests, which are among the largest bird-created structures. Check out this photo of a Sociable Weaver nest colony. Other weaver nests can look almost obscene.

Looking at my Gambia bird guide, it looks like there are at least 12 species of weaver there. I’ve been trying to find out if any other bird species that make pendant-style woven nests live here in Northern Illinois. Looking through Wikipedia and All About Birds, I found that five other Oriole species that live in the United States build weaver-style nests: Altamira; Spot-breasted; Hooded; Scott’s; and Bullock’s. However, all of these are either western or southwestern species; none range in Northern Illinois. Does that mean that if we find a weaver nest here, it is definitely from a Baltimore Oriole? That would be pretty handy, identification-wise.