First, here’s a picture of me with Pip from last week’s class. 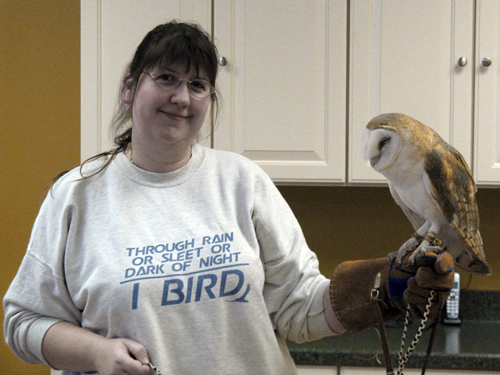 During this week’s Raptor Internship at Flint Creek we learned about diurnal raptors. In the afternoon we had our third handling experience.

The lecture focused on eagles, falcons, and some hawk species (the rest will be covered next week). Birds most commonly found in northern Illinois were covered in depth, while other North American raptors were briefly discussed. Besides telling us about field marks and habitat, sometimes Dawn would talk a bit about concerns with particular species in captivity. For example, American Kestrels, particularly females, are prone to obesity in captivity. Dawn also told us about the Peregrine Falcon monitoring that is done in Chicago, which is coordinated via the Field Museum at expedtions@fieldmuseum.

After lunch we got to handle Meepy, Flint Creek’s resident Barred Owl. Meepy has been at the Itasca facility since 1992. She was being raised illegally when she was brought in, so she is imprinted on humans. She used to free fly in programs and indeed she is fully flight capable. I was practically bursting all morning after I learned we would get to work with Meepy. When it was time to start I was eager to go first (I don’t think my classmates minded)!

This was the first time any of us handled a raptor outdoors. I took Meepy from her mew, so it was also the first time I got to take a bird onto my glove and put on all of the equipment from scratch. 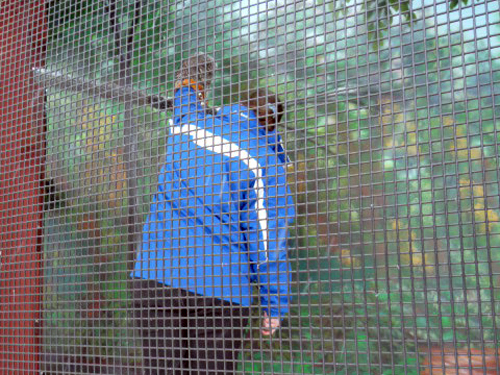 Inviting Meepy to step onto my glove

Barred Owls have a lot of feathers on their legs, so it was a challenge to get her jesses in. Like Darwin and Pip, Meepy was extremely patient as I struggled with her equipment. 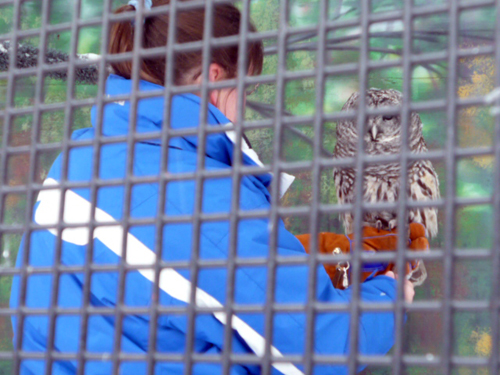 Working through the fluffy leg feathers

Eventually jesses, leash extender and leash were secured and I took Meepy out of her mew. Together with Dawn and Tawny, a journalism student who joined our class for the day, we walked around the Flint Creek grounds. It was snowing so all was quiet and beautiful. (Many thanks to Tawny for all of the Meepy photos in today’s post). 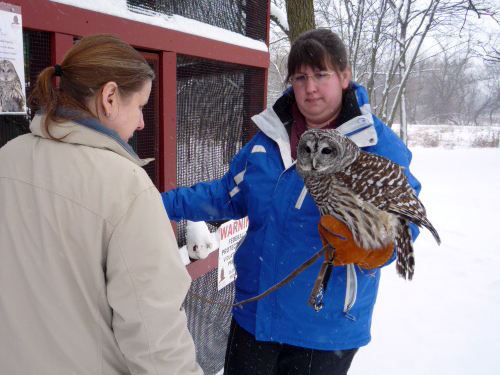 Outside the mew, finally

During the walk we talked about how to handle potential hazards when out walking with a bird, like dogs, strollers and bikers (apparently Meepy is afraid of all three). There was no one else using the paths on Tuesday, but the Saturday class (with nine students!) had a hazard for everyone. Meepy also bated a few times, so I got to practice raising my arm during a bate and waiting for her to settle before walking on. 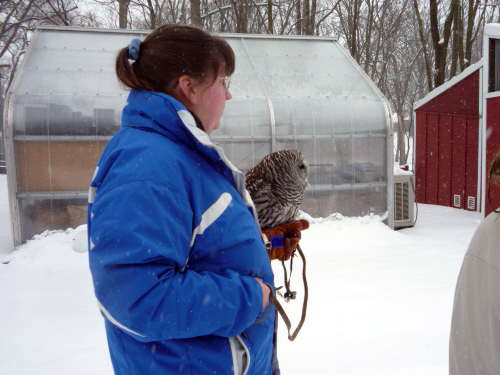 After the walk we returned to the classroom. I learned how to take a gloved bird through doors (bird first) and then handed Meepy off to Dawn. Boy was I tired at the end. I really need to work on my arm strength – I was pretty disappointed in how quickly my arms tired after carrying such a light bird (Meepy is probably no more than 2 pounds)!

There were just four students in class this week, and we all got to walk with Meepy outside. I think it went really well for everyone. Fortunately we were able to leave a bit early for the day, as the snow never stopped on Tuesday and we ended up with well over a foot of accumulation. The drive wasn’t easy but being able to leave early sure did help.

Next week: more diurnal raptors and more handling! And hopefully, after two Tuesday snows in a row, no more snow!