Wow, I can’t believe the Raptor Internship is already over the halfway point! This week’s lecture was about housing requirements for raptors, and about transporting birds. As usual, in the afternoon we had handling experience.

First we observed as Dawn and volunteer Karen changed the anklets on 0511 (“oh-five-eleven”), one of Flint Creek’s resident Red-tailed Hawks. Here’s 0511 before the procedure. She’s so beautiful! 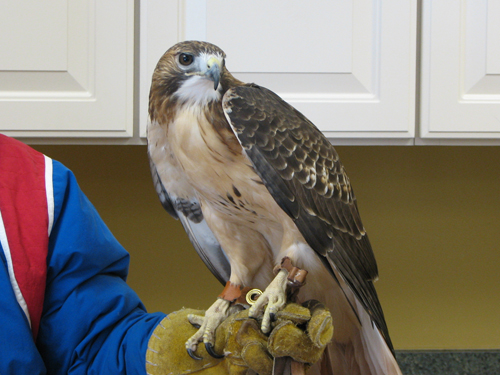 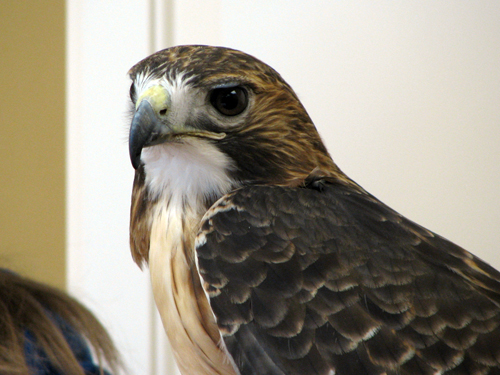 Then we all took turns walking with Darwin. Darwin was the first bird we handled, back in week 3. Here he is on a classmate’s glove before going outside. Isn’t he gorgeous? 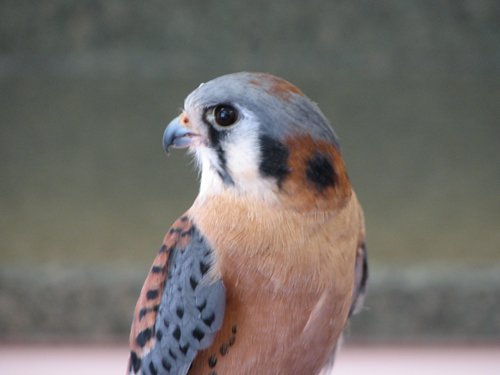 When we weren’t walking, we were scrubbing & cleaning. The highlight for me was finding a headless mouse in Darwin’s mew. 😛

After everyone had a turn walking with Darwin, it was nearly time to leave for the day so we were dismissed. One classmate and I stayed a bit longer so we could walk with Darwin alone. Our first solo walk with a bird! Thank you Connie for taking a few photos of me with Darwin. Here’s my favorite. 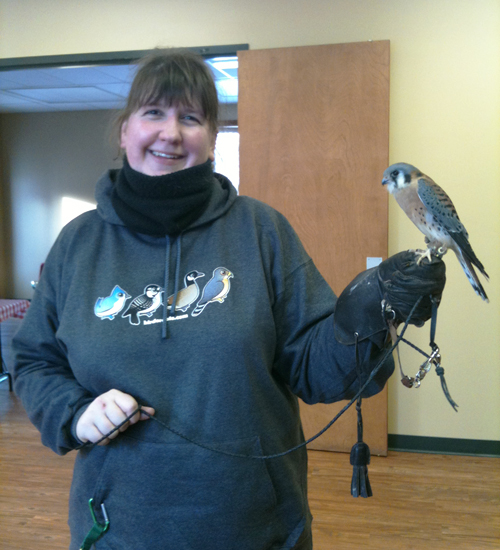 During the walk I passed a man and his daughter who were interested in Darwin. I told them he was an American Kestrel and was going to say more but the man started to approach me and I suddenly got nervous. Raptor education FAIL. I politely asked the man and his daughter if they wouldn’t mind to continue their walk. Later I passed another man walking on the path; he offered to stop and let us pass. I had the idea he had been walking there before and passing someone with a bird on the glove wasn’t so remarkable to him.

After everyone had left, Dawn asked if I wanted to put Darwin back in his mew, and feed him. Oh, sure, I can do that. 😉 Dawn handed me a mouse and I walked into Darwin’s mew. I set the mouse on a stump and removed his equipment. It had been a while since I’d worked on removing a leash extender so I it took me a minute. Then I raised my hand to let Darwin fly to his perch. I didn’t open my fingers enough and he was a bit stuck for a moment before his jesses were free from my glove. I felt bad about it but Darwin wasn’t hurt and I certainly learned from my mistake – that won’t happen again.

Next week: training (and hopefully less mice than this week).