On Thursday Arthur and I are volunteering for Flint Creek Wildlife Rehabilitation’s Migration Rescue & Recovery. Each morning during the spring and fall migration period, volunteers look for injured fallen birds who have struck buildings in downtown Chicago. Birds rescued by FCWR volunteers are treated at the Northerly Island bird hospital. Salvages are brought to the Field Museum. 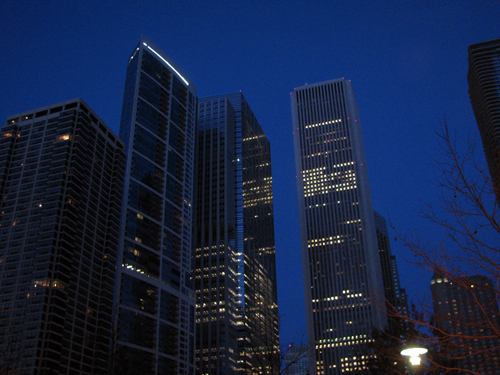 A bit of Chicago before sunrise

Thousands of birds strike glass on Chicago’s many buildings during their twice-yearly migration through the city. These stunned birds fall to the ground where they lie unconscious. Without intervention, they are stepped on by unaware pedestrians, eaten by hungry gulls or die a slow death without the benefit of medical treatment. These birds include many beautiful warblers, woodpeckers, thrushes and buntings, among others. Last year [2007], an amazing 90% of birds that arrive for treatment at our Northerly Island facility recover and can be released back to the wild. Timely treatment is important to survival rates and rescue teams ensure that birds can be treated by our trained staff at Northerly Island where they will have their best chance of survival. 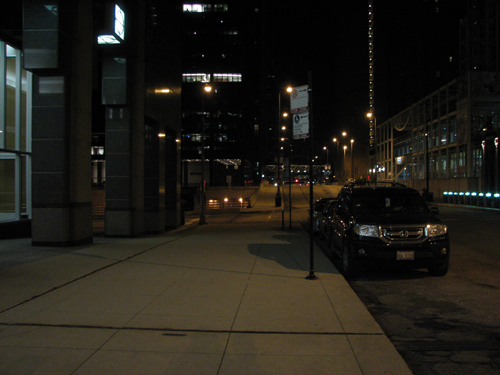 Earlier this month at Birding America we attended a lecture by Dave Willard where we learned a lot about the hazards of migration through Chicago’s urban environment. The number of birds that are killed from window strikes each year is incredible.

The Rescue & Recovery we are doing takes place early in the morning, to save or salvage nighttime migrant birds that have struck the buildings before sunrise. According to the American Bird Conservancy, the intrusion of light into migratory bird flyways poses added danger to an already perilous journey. The interior and exterior lights on tall buildings and bright uplights used for decorative illumination of monuments, government offices, parking garages, and other structures of all heights, emit light fields that can entrap birds. The birds are reluctant to fly from a well lit area to a dark one, particularly during periods of low cloud cover or inclement weather when views of the stars and moon, which serve as navigational aids, are obstructed.

So turning off the lights helps. It helps a lot. A study done at Chicago’s McCormick Place convention building found that turning lights off reduced bird deaths by up to 88%. For all the days counted, 1297 birds died from hitting lit windows while only 192 birds died from hitting dark windows (either because the lights were out or heavy drapes were drawn). After adjusting for the variance in lit versus dark windows, the overall reduction was 83%.

Programs like Lights Out Toronto, Smart Lights/Safe Flights in Cleveland, Lights Out Chicago, and several other lights out programs across the U.S. encourage building managers to dim their lights during the spring and fall migration period. Besides saving lives, turning off the lights is good for the environment and saves money on energy costs. That’s why I don’t really understand or support the Earth Hour initiative. A global campaign to switch of lights anytime they aren’t needed – like in all office buildings outside of working hours – would make more sense to me.

As awareness about the hazards to birds caused by buildings increases, programs like WindowCollisions.info and Birds and Buildings are able to educate and work with the public and an increasing number of firms to make modern construction safer for our avian friends. Birds and Buildings works “to educate members of the building industry […] about the design practices that send the wrong signals to birds, the signals that tell birds it is safe to fly into a window.”

Despite the Lights Out programs and expanding knowledge on bird-safe construction practices, bird strikes still occur. Not all of the birds die in the initial strike. Rescue & Recovery aims to collect stunned and injured birds and get them to care as soon as possible. Most rescued birds can be released the same day they were picked up. Yesterday we got good news about a Brown Creeper that was picked up on our morning route – released. Good luck, little creeper! This entry was posted in FCWR, Migration. Bookmark the permalink.

2 Responses to R&R in Chicago